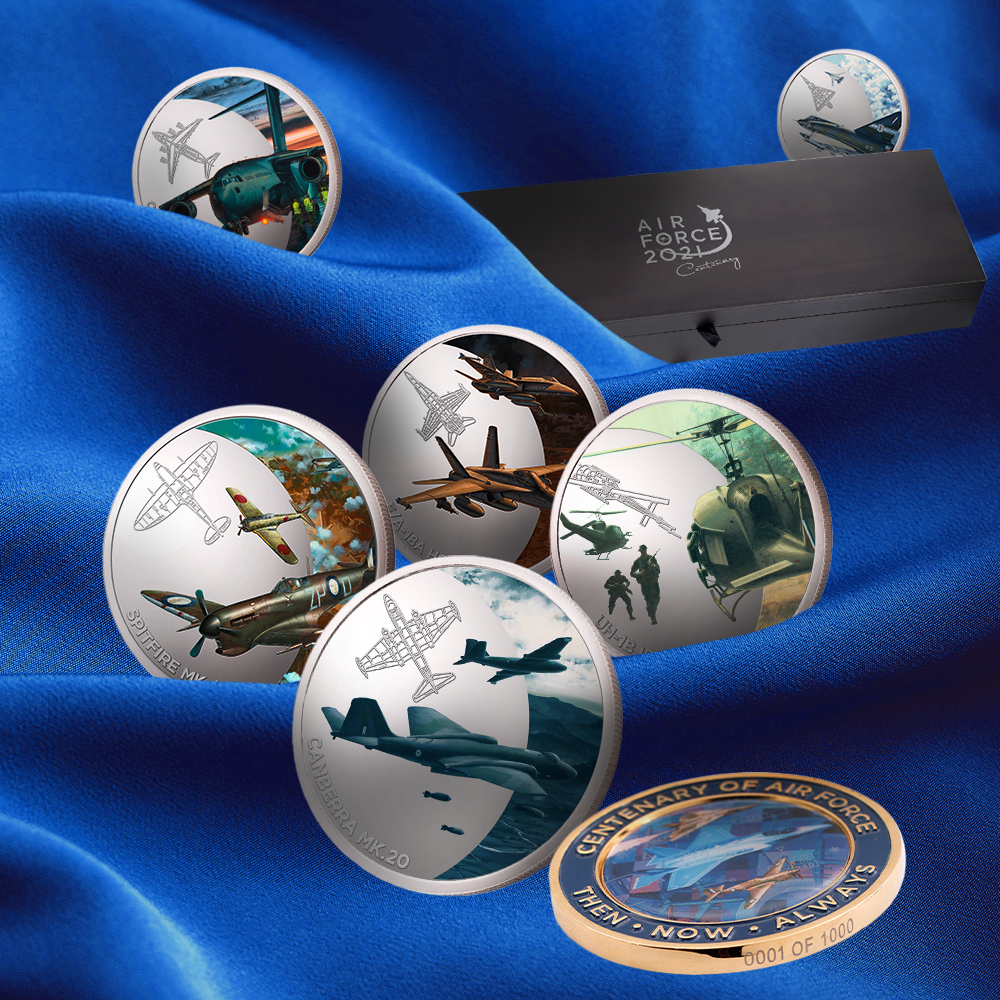 Stunning Air Force 100 Limited Edition Medallions play a special part in the Air Force Centenary collection. With 12 unique limited-edition proof quality medallions, these wonderful pieces are a must-have for every collection. Every medallion features artwork from leading Australian military aviation artist, Drew Harrison, alongside a schematic of the aircraft in frosted silver. Adding to the unique features, every medallion displays the Air Force Centenary logo on the reverse, creating a beautiful medallion to treasure. 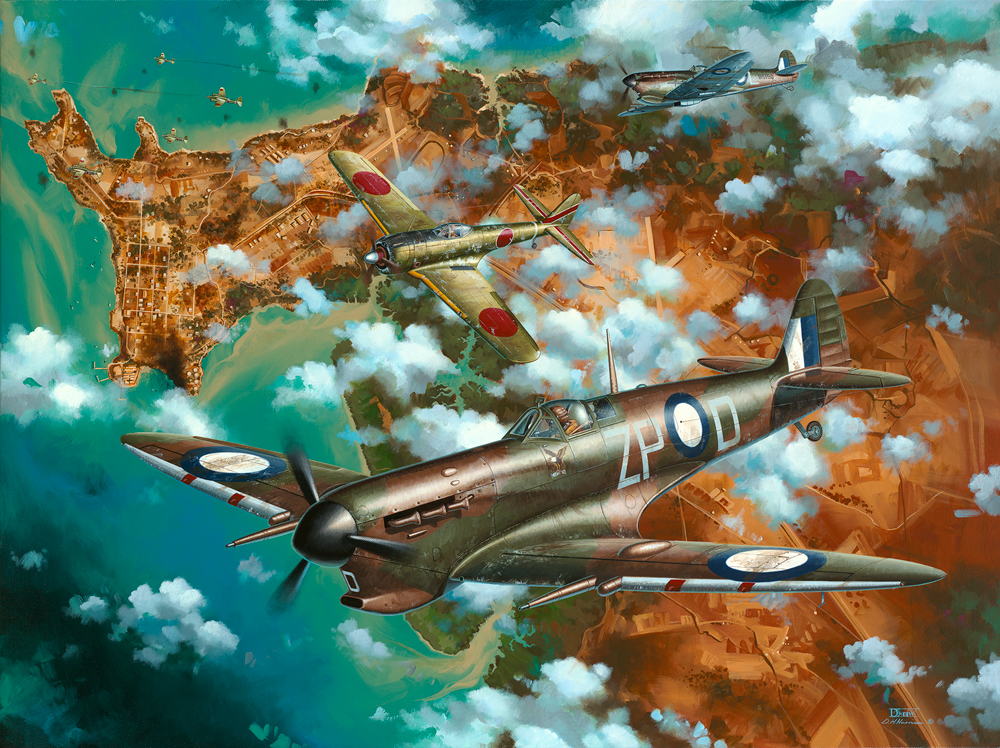 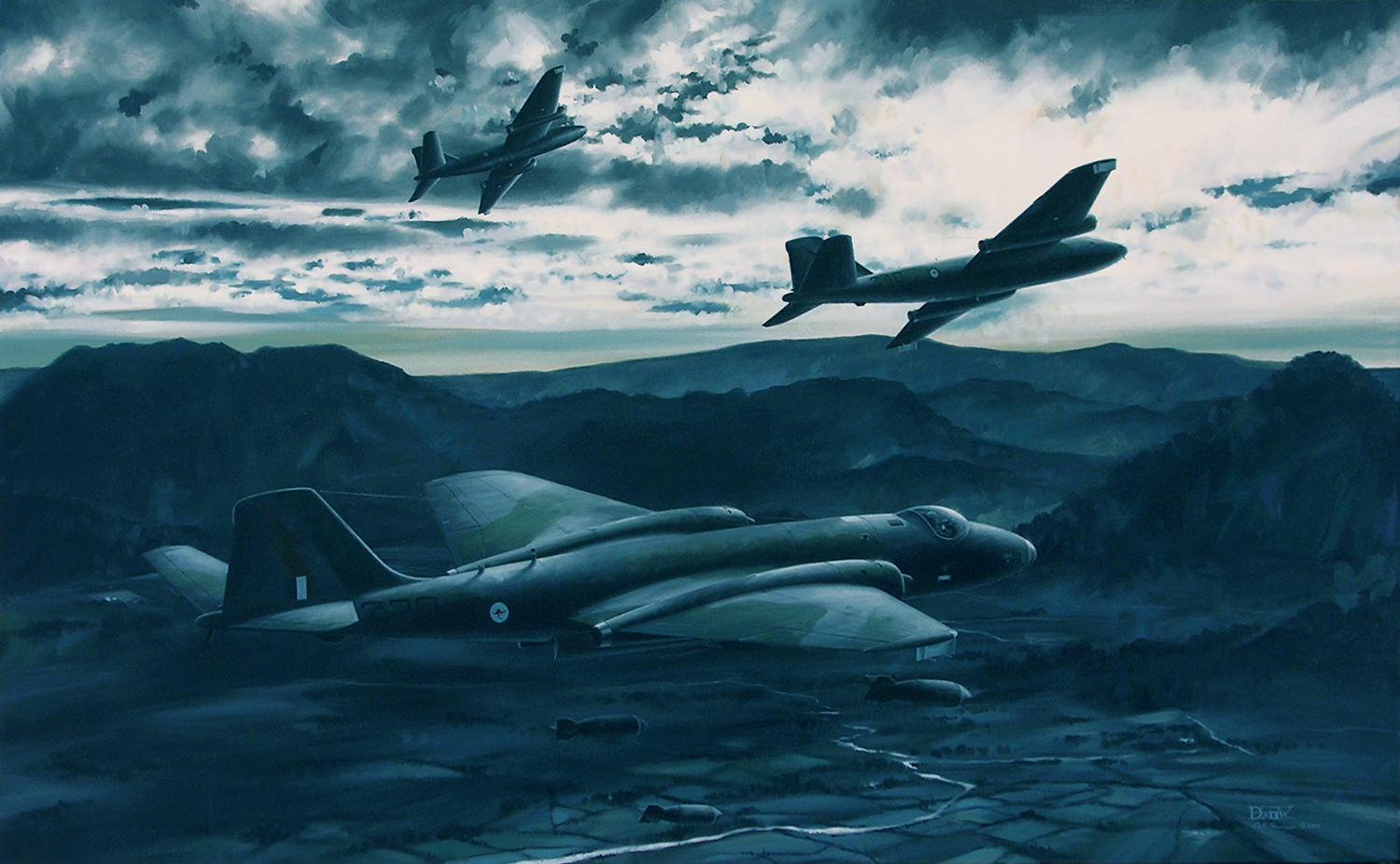 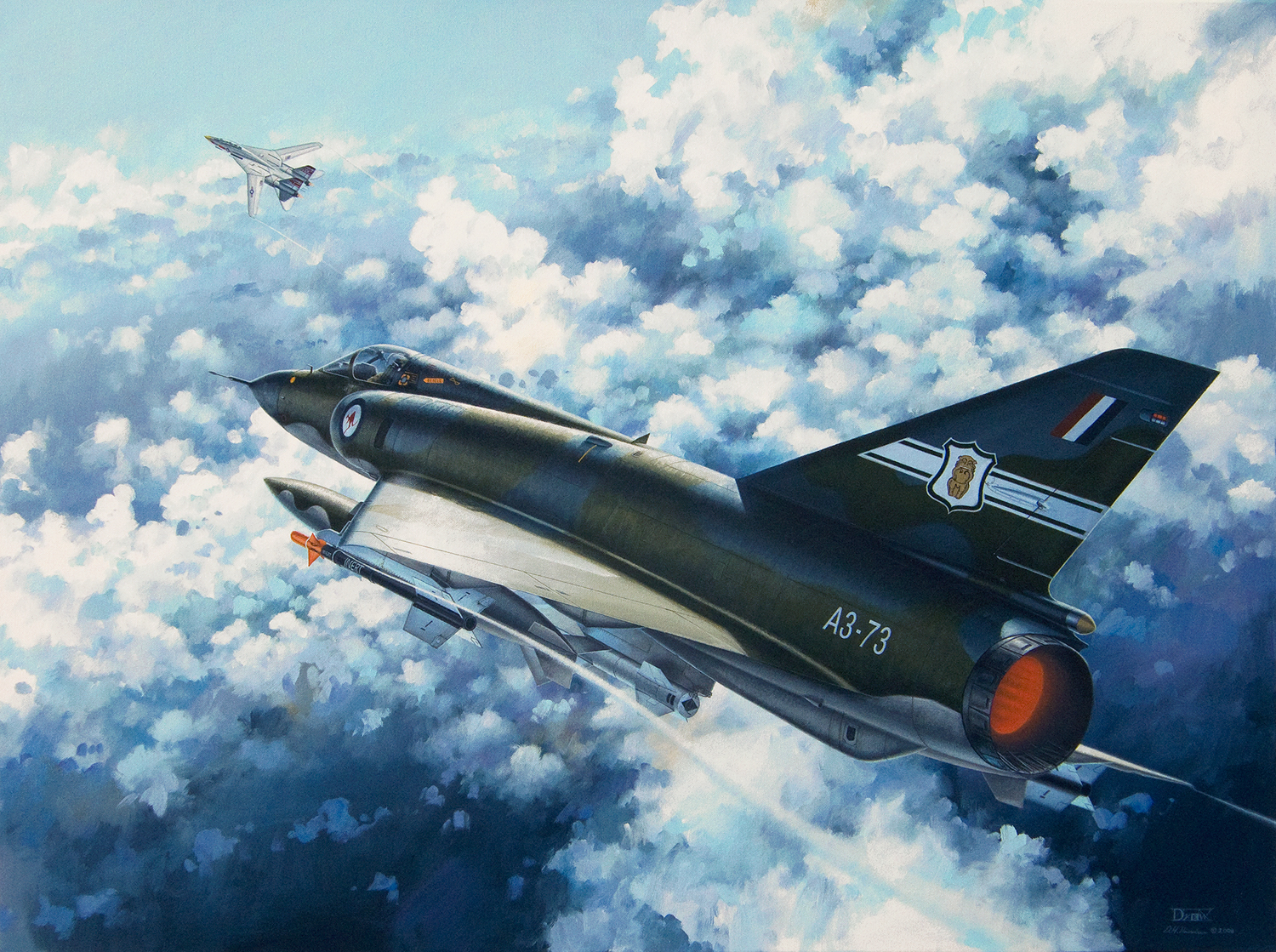 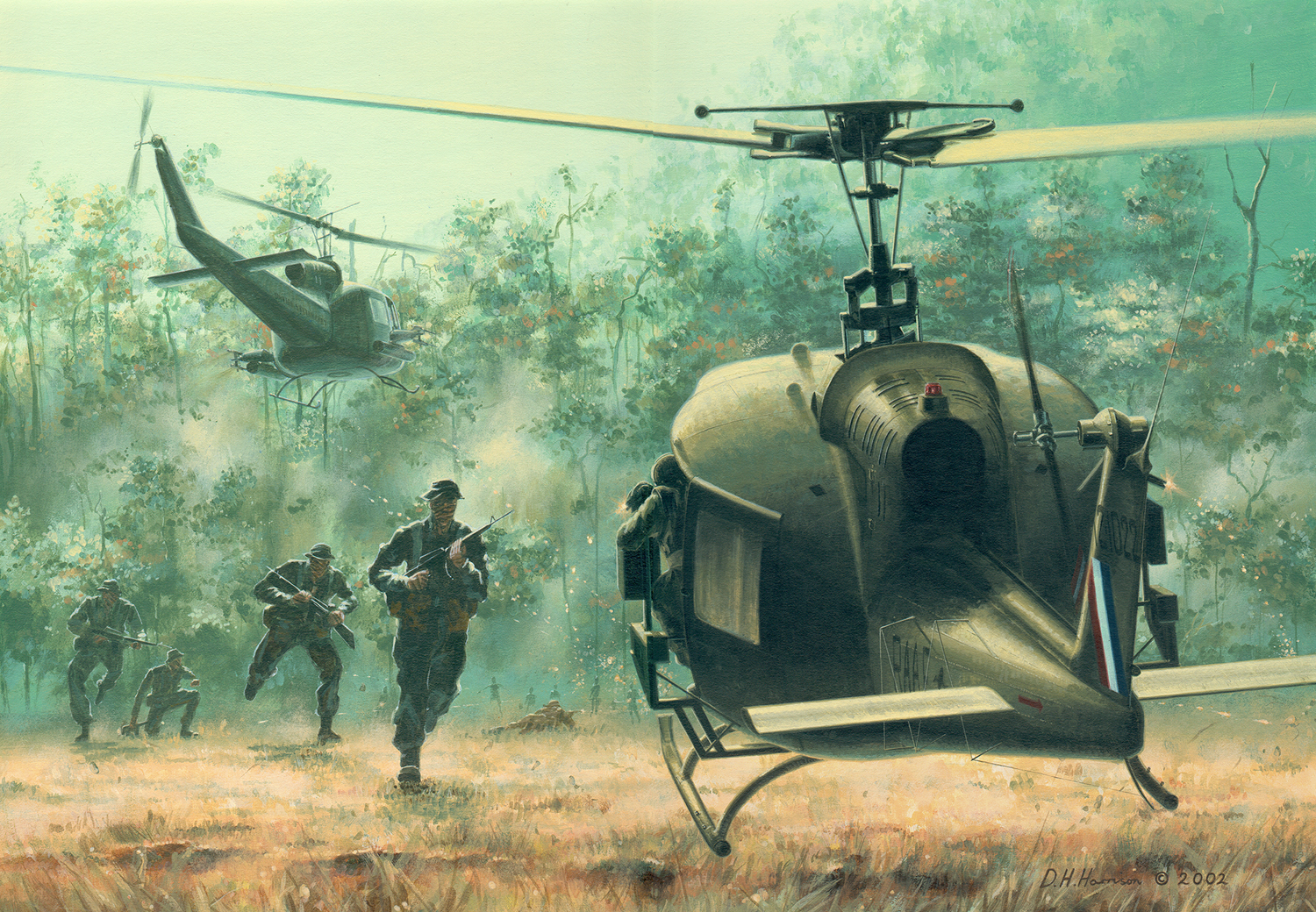 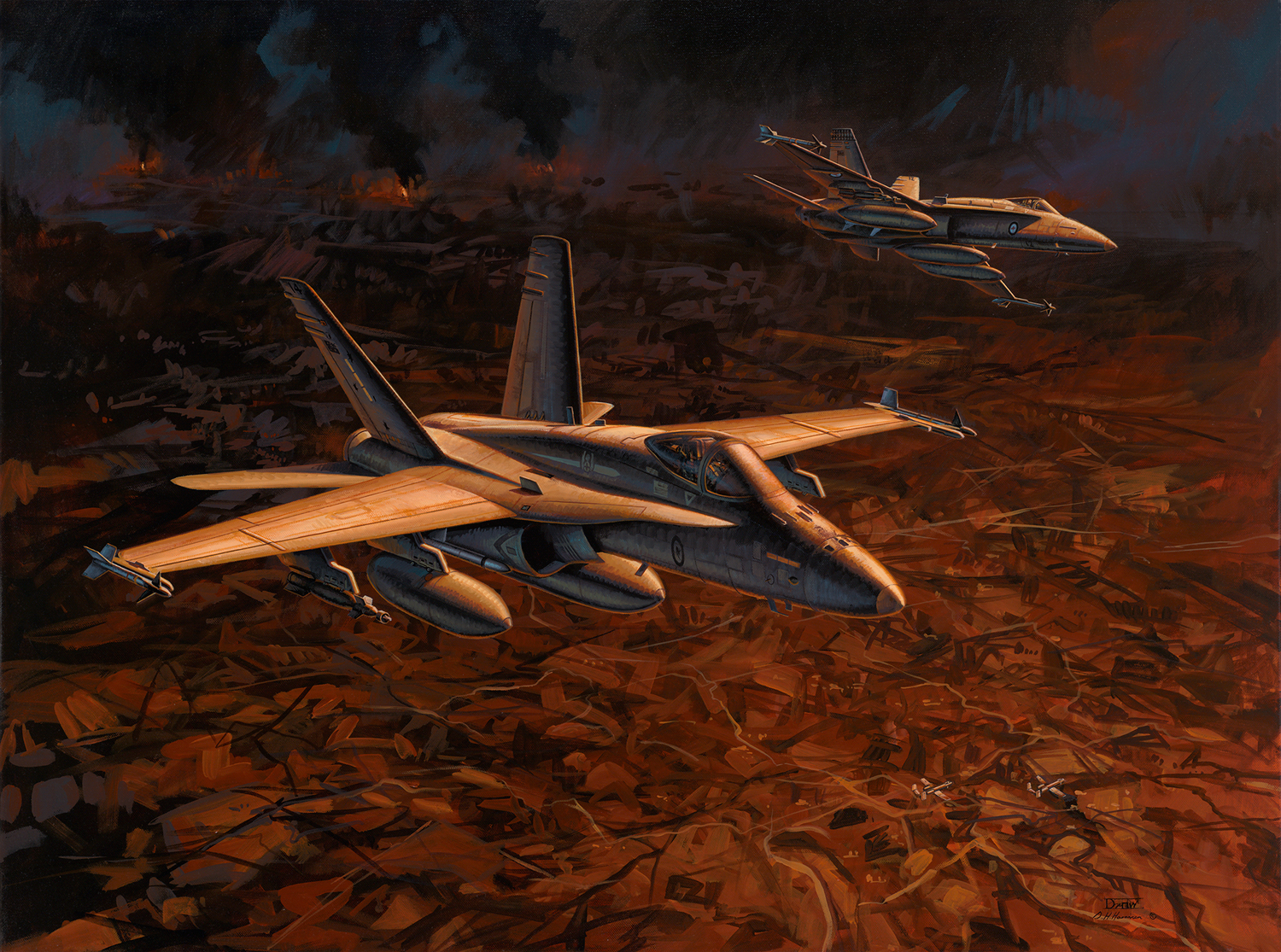 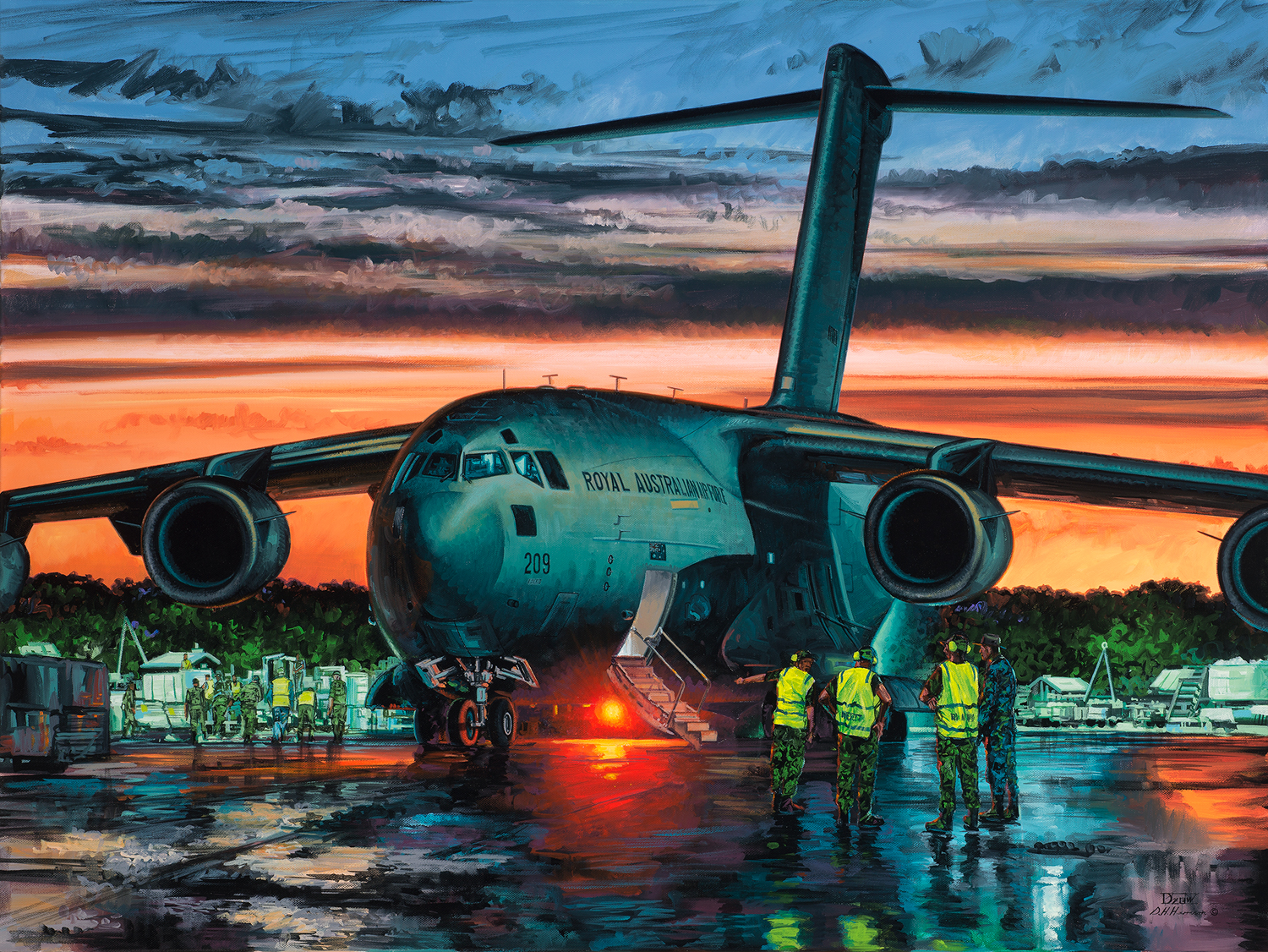 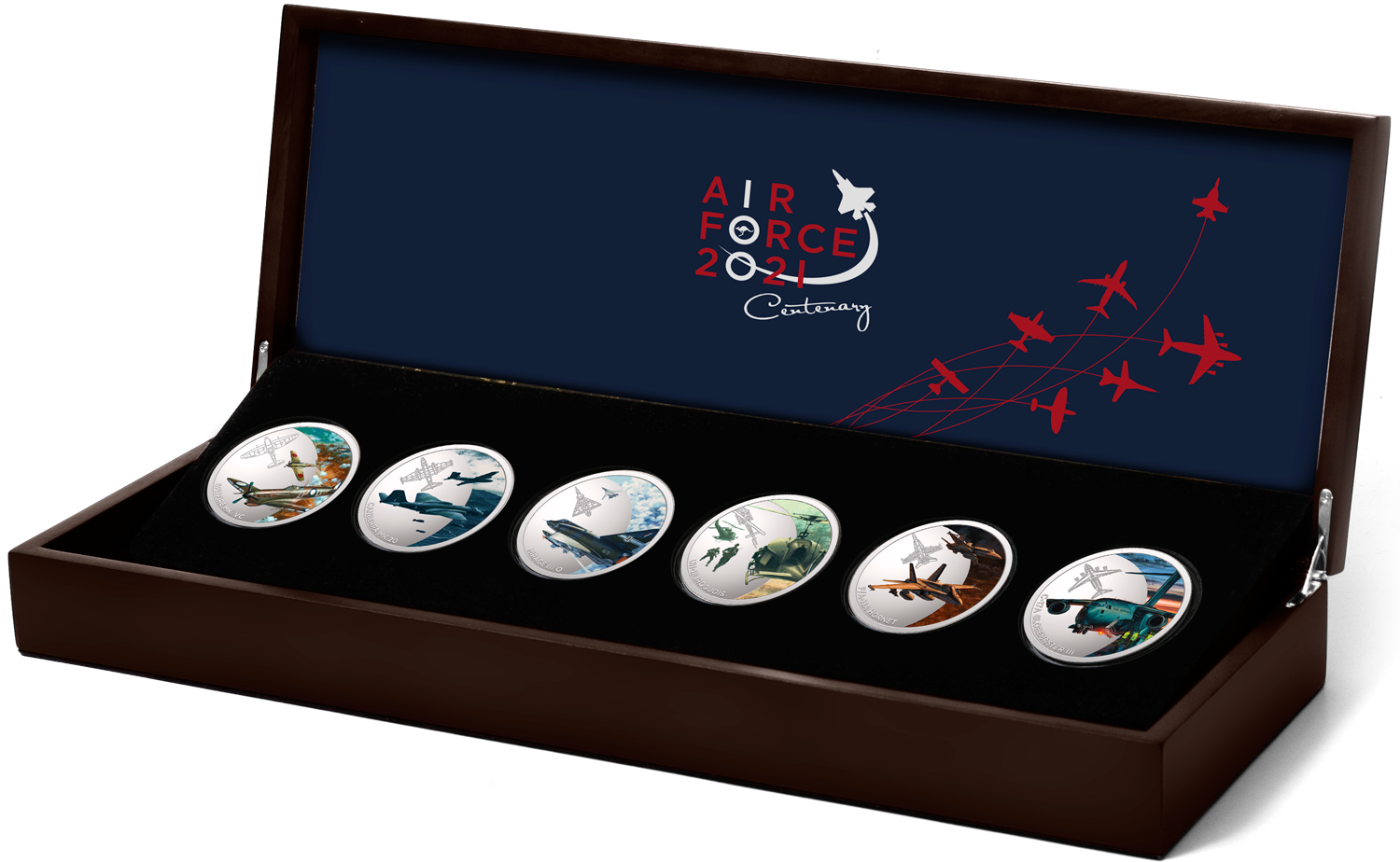 Honouring Australia’s longest active wartime engagement. For those who served in the conflict in Afghanistan, and those who waited at home, these beautiful medallions share the story of service, courage and mateship. These sensational proof quality medallions are a beautifully detailed reflection of the many facets of Australia’s involvement in the Afghanistan conflict. These unique medallions are available individually and in sets. 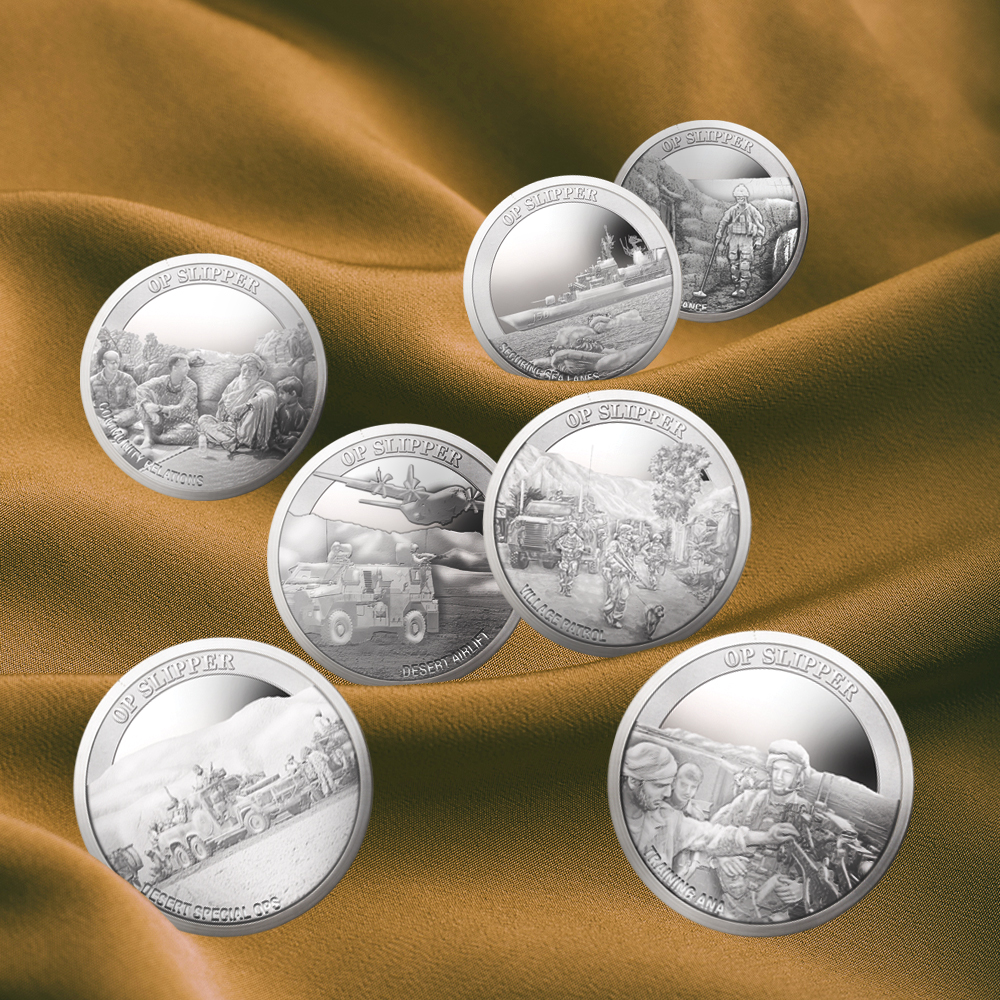 Operation Slipper
In service against terrorism 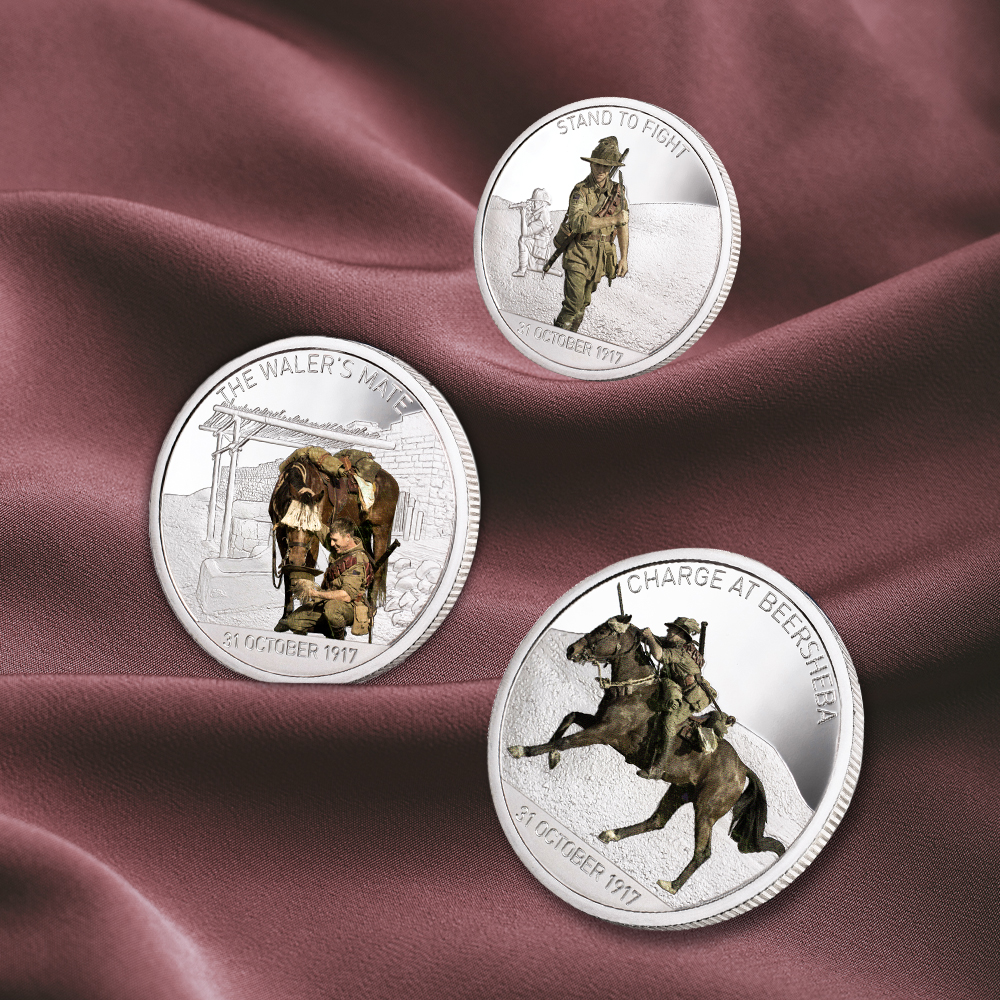 Commemorate the charge of the 4th Light Horse Brigade at Beersheba with stunning limited edition medallions. Honouring the men and horses of the Australian Light Horse in the Centenary year of the famous charge these stunning medallions are intricately detailed. Remembering the brave men and horses who mounted a cavalry charge to capture the Turkish stronghold on the 31st of October 1917, these limited edition medallions are an important addition to any collection and beautifully share this incredible story.

Celebrate the S-70A-9 Black Hawks as they come to their end of service with the Australian Army. Playing a pivotal role with the Australian Army Aviation (AAAvn) and the Royal Australian Air Force since its acceptance in 1987, the Black Hawk has fulfilled numerous military roles and roles within the wider Australian community. Commemorate this beloved aircraft with proof-quality medallions and silver and gold limited edition medallions. Featuring artwork from leading Australian aviation artist Drew Harrison depicting the S-70A-9 Black Hawk in flight, with a schematic of the aircraft on the reverse, these limited edition medallions are a must-have for any aviation lover.
Explore the Black Hawk medallions now. 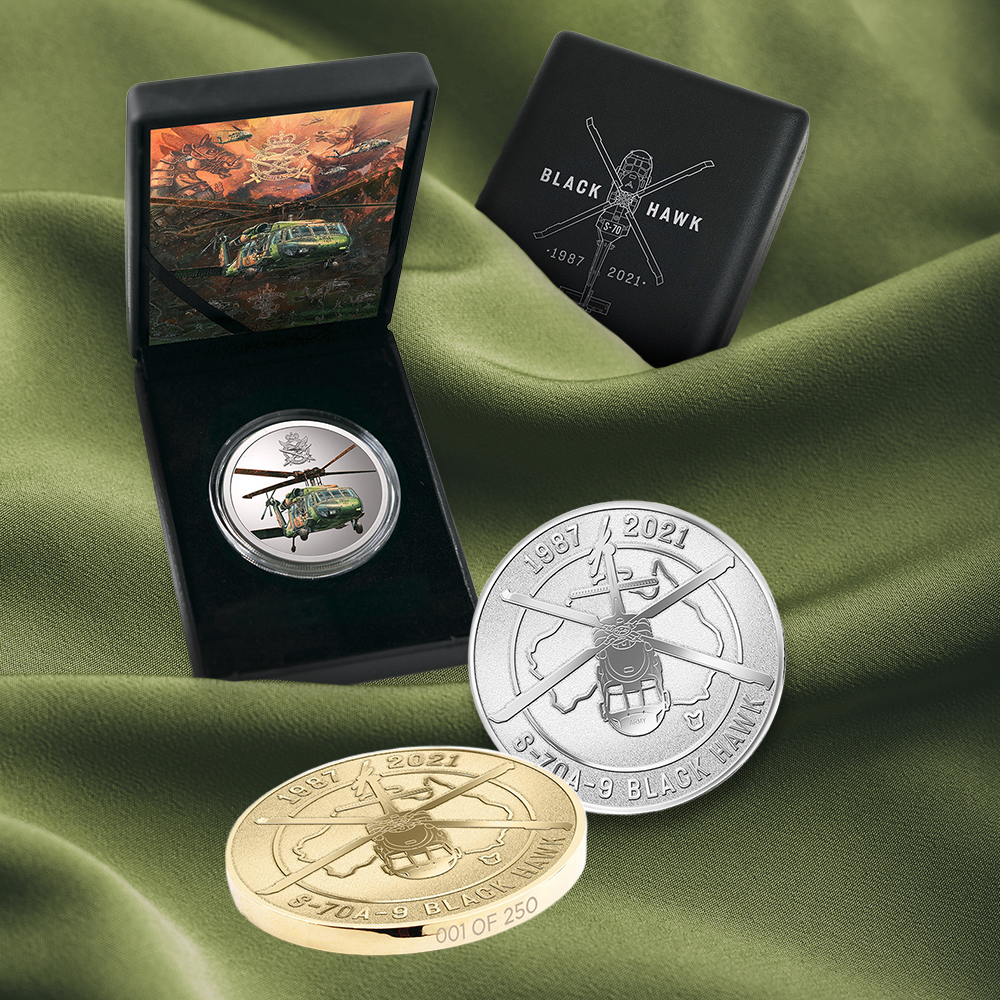 The End Of Service Collection:
The S-70A-9 Black Hawk

A unique collection of six limited edition medallions featuring some of the most iconic aircraft of the past 100 years of service with the Royal Australian Air Force. Created to commemorate the Air Force Centenary, these sensational medallions feature snippets of the artwork from Australian military aviation artist Drew Harrison. Capturing the F-111, C-130 Hercules, Lancaster Bomber, P-51D Mustang, the Catalina, and the CAC Sabre, this wonderful collection is available as a set or individually, making for spectacular additions to any collection.
Explore the collection now. 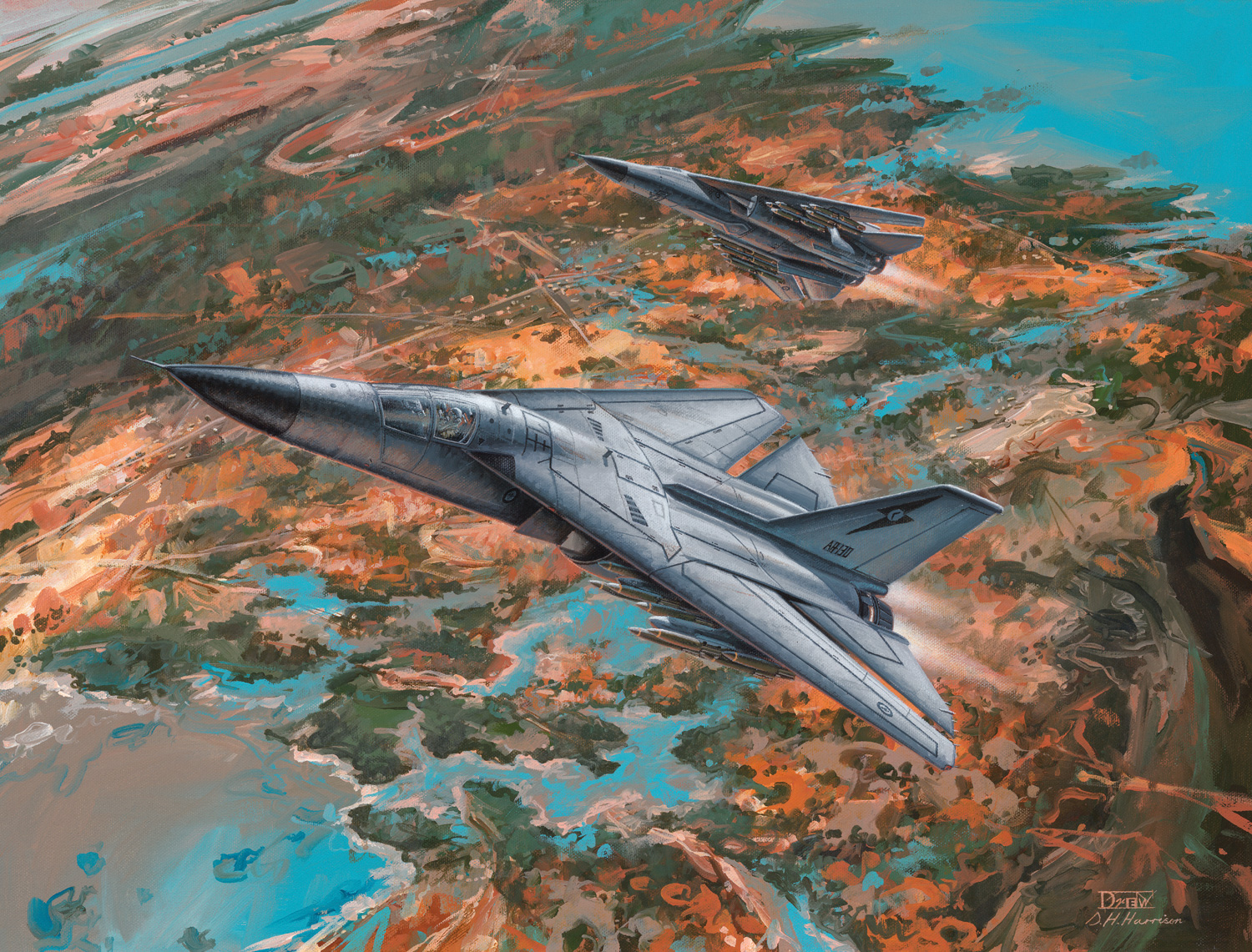 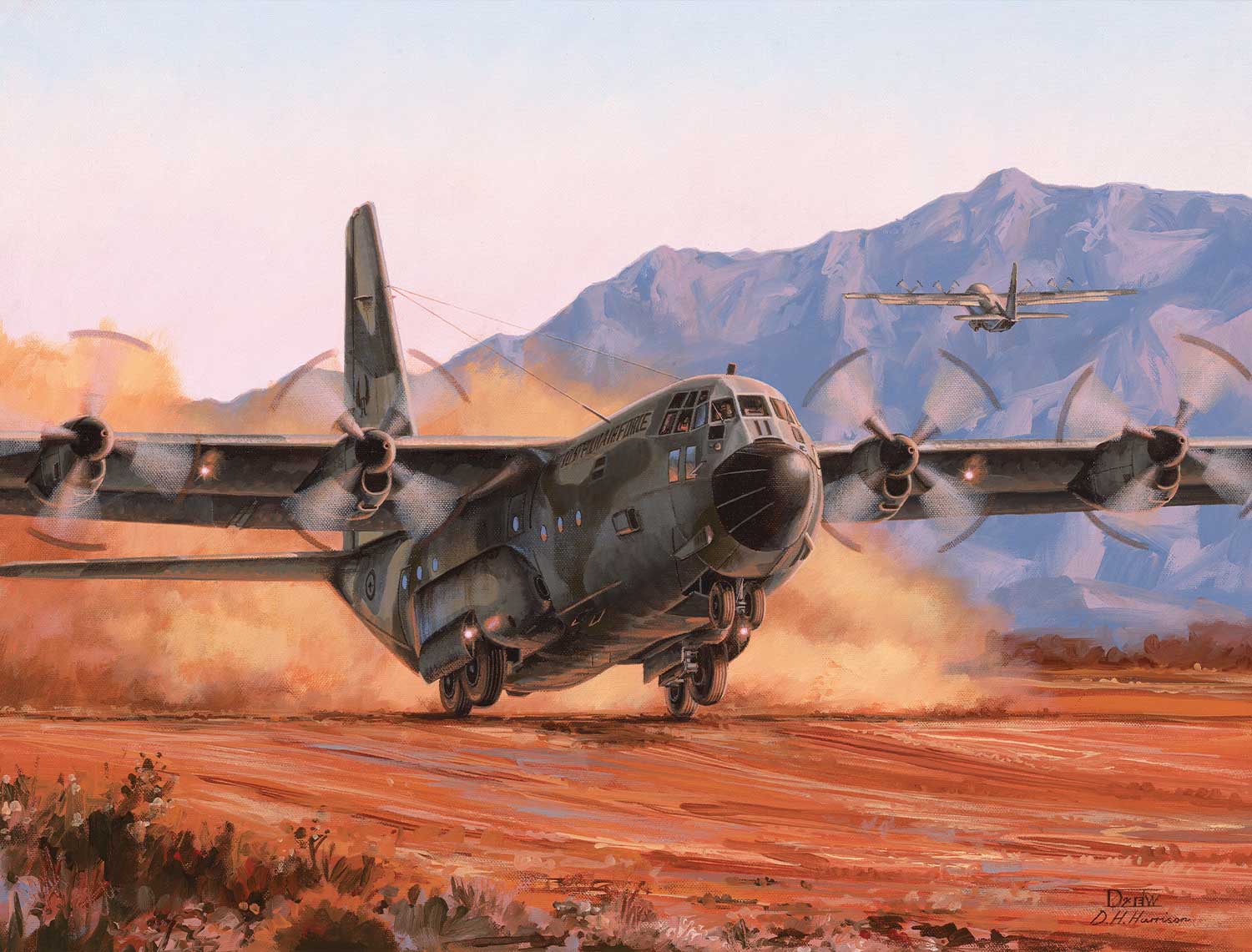 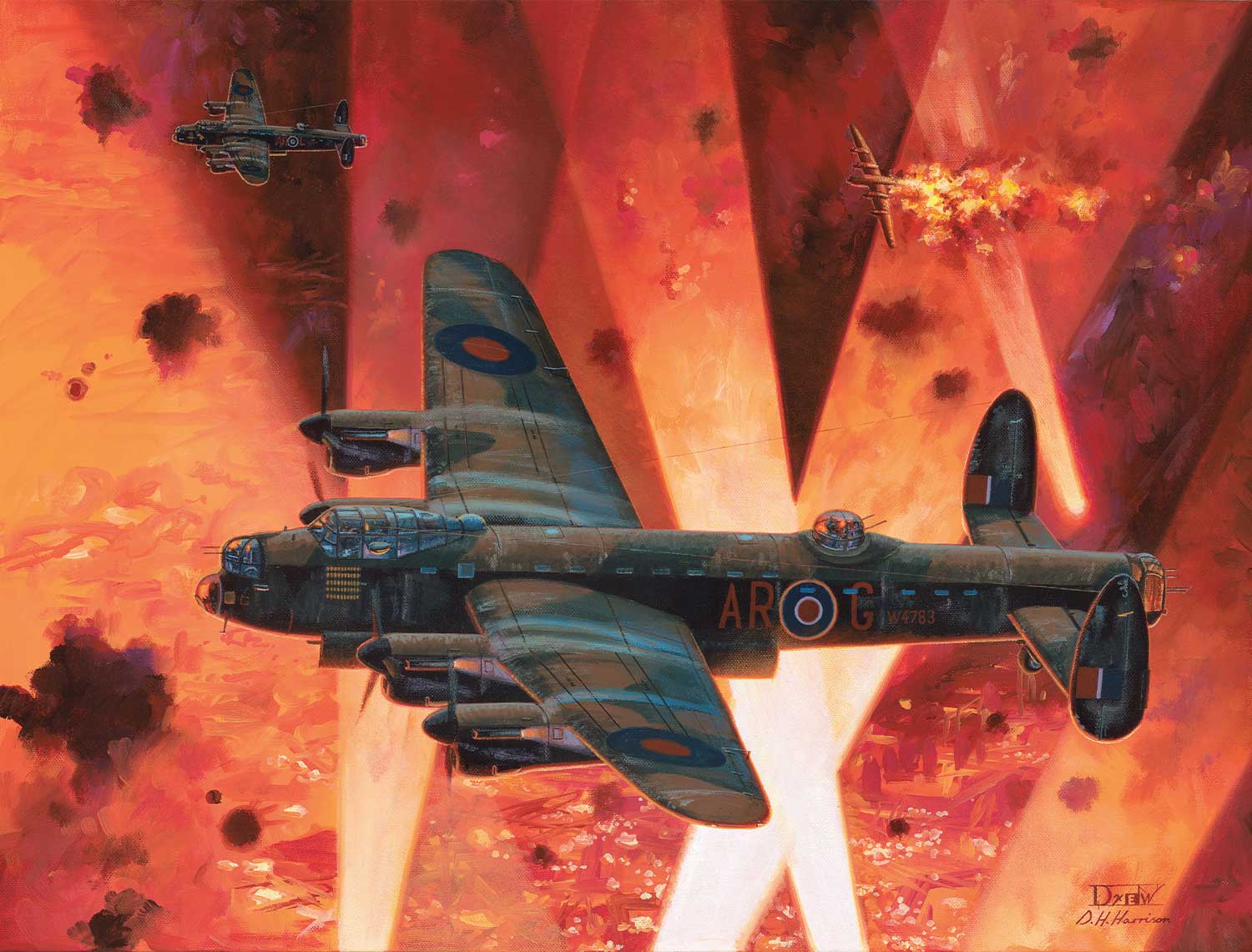 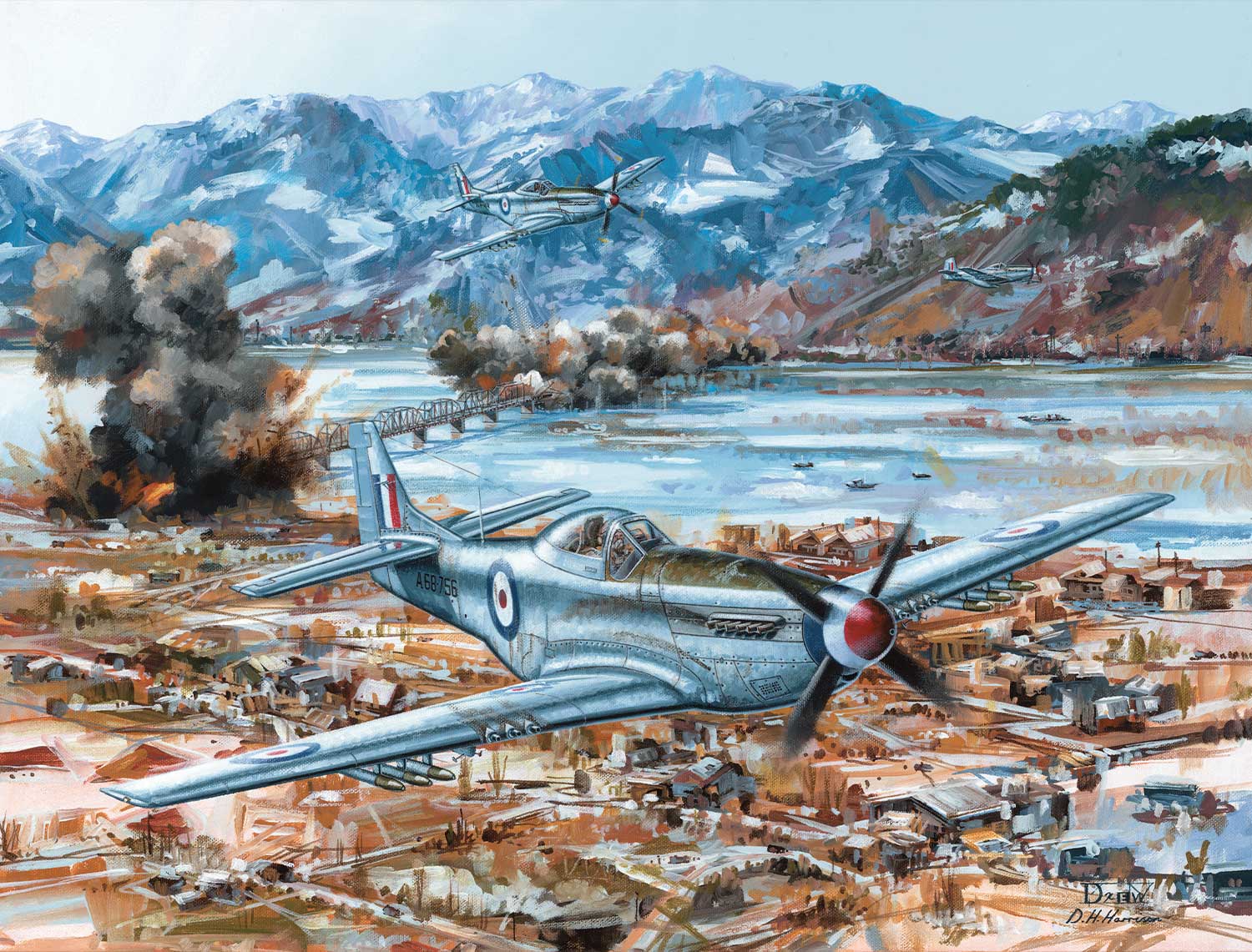 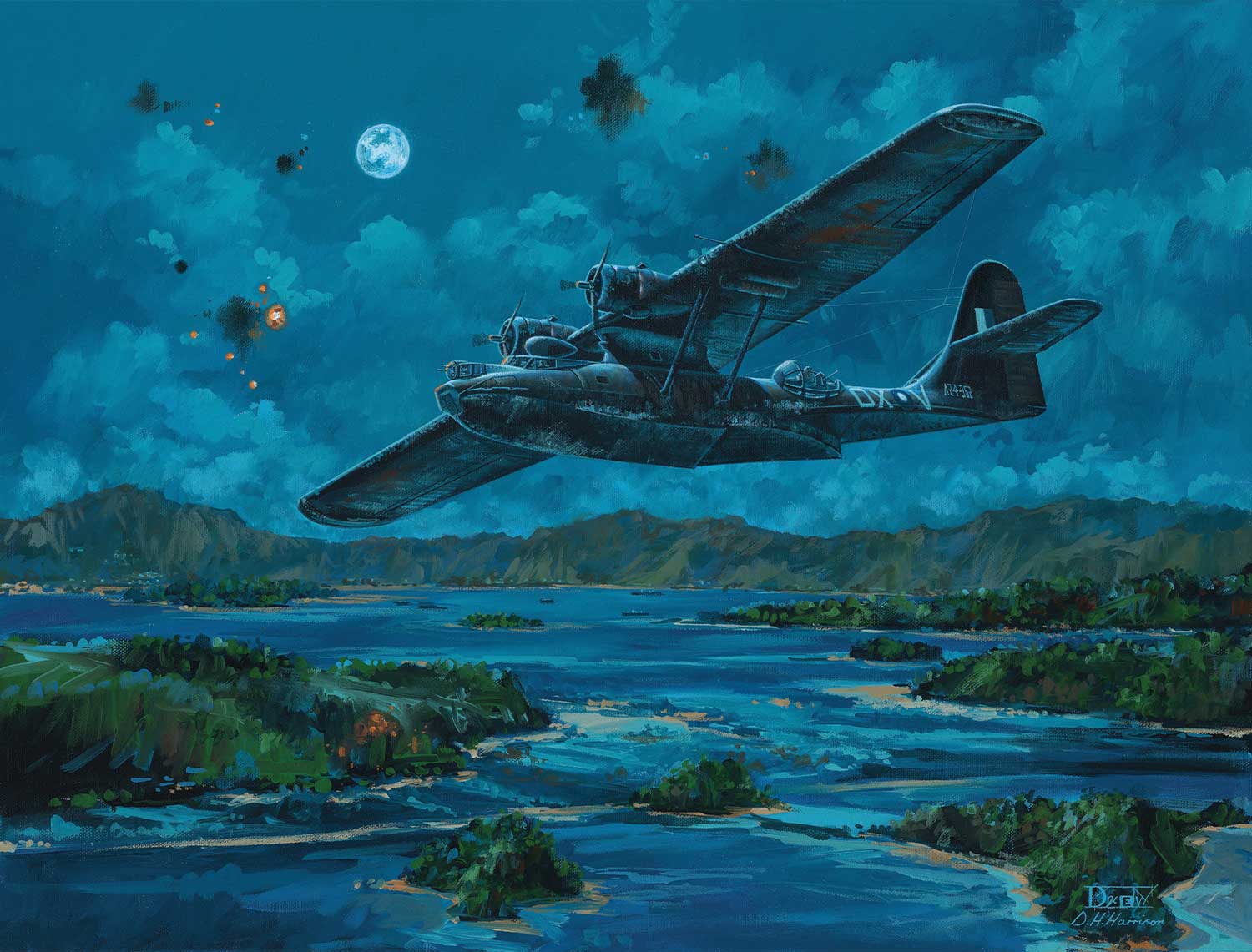 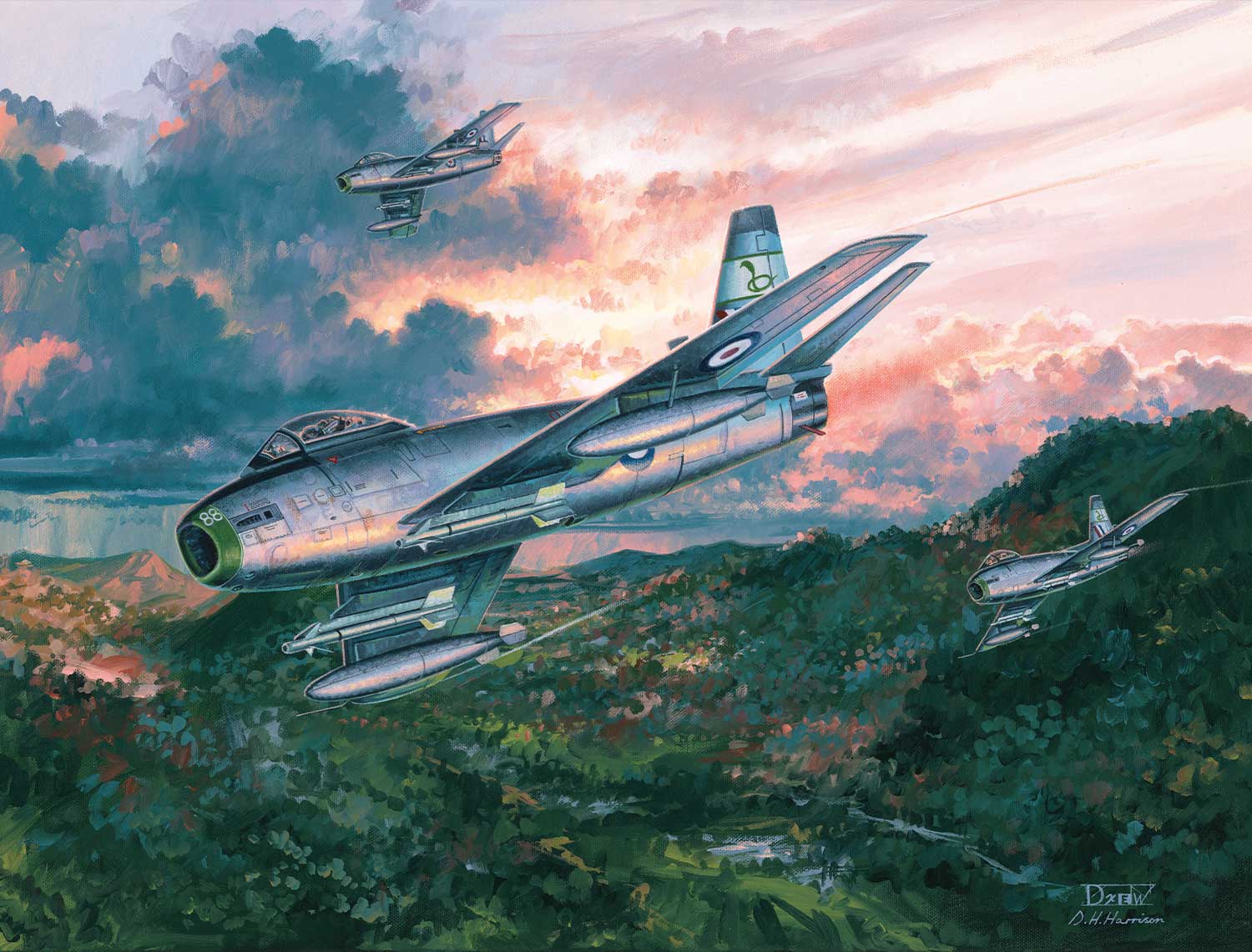 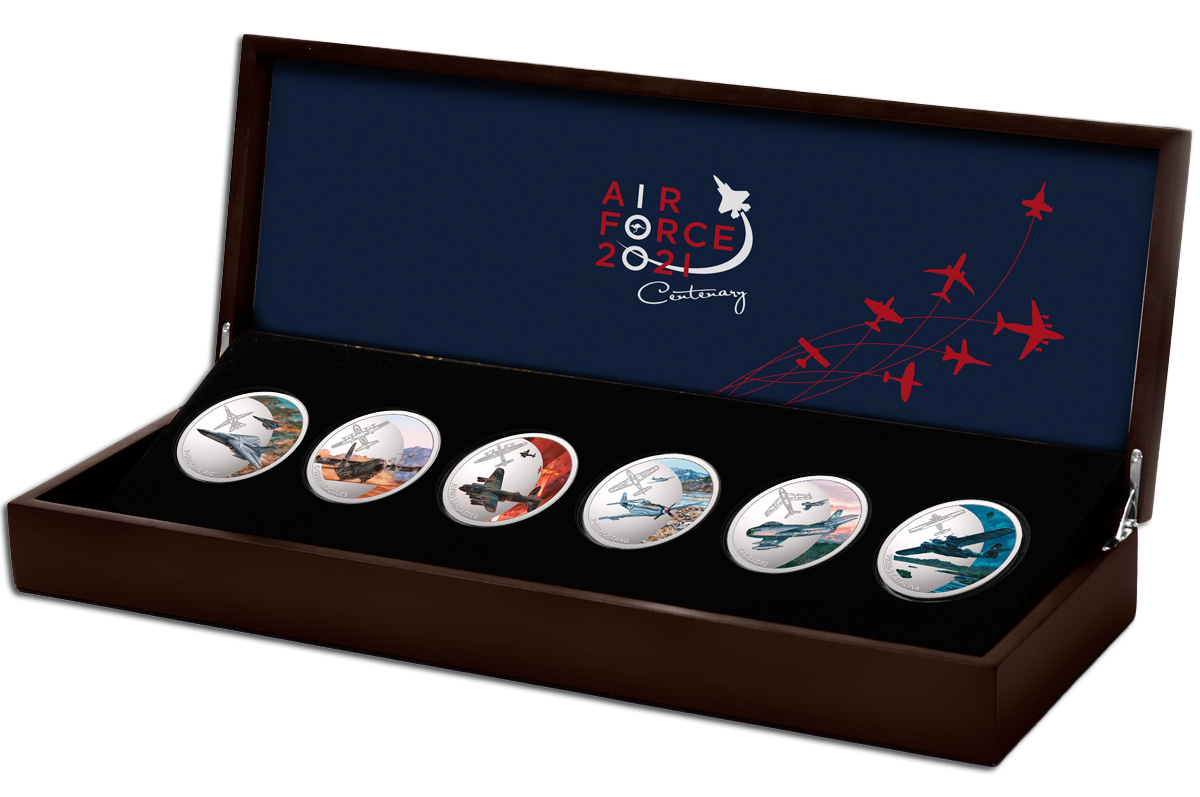 Find and collect incredible proof quality medallions commemorating the 100th anniversary of the Royal Australian Navy’s first visit to Sydney. Own an important piece of this wonderful collection honouring the ships and stories of service. These medallions beautifully capture the pride in fleet. With unique features on these limited edition medallions, these highly polished and frosted silver-finished medallions are a perfect addition to any collection.
Explore the collection. 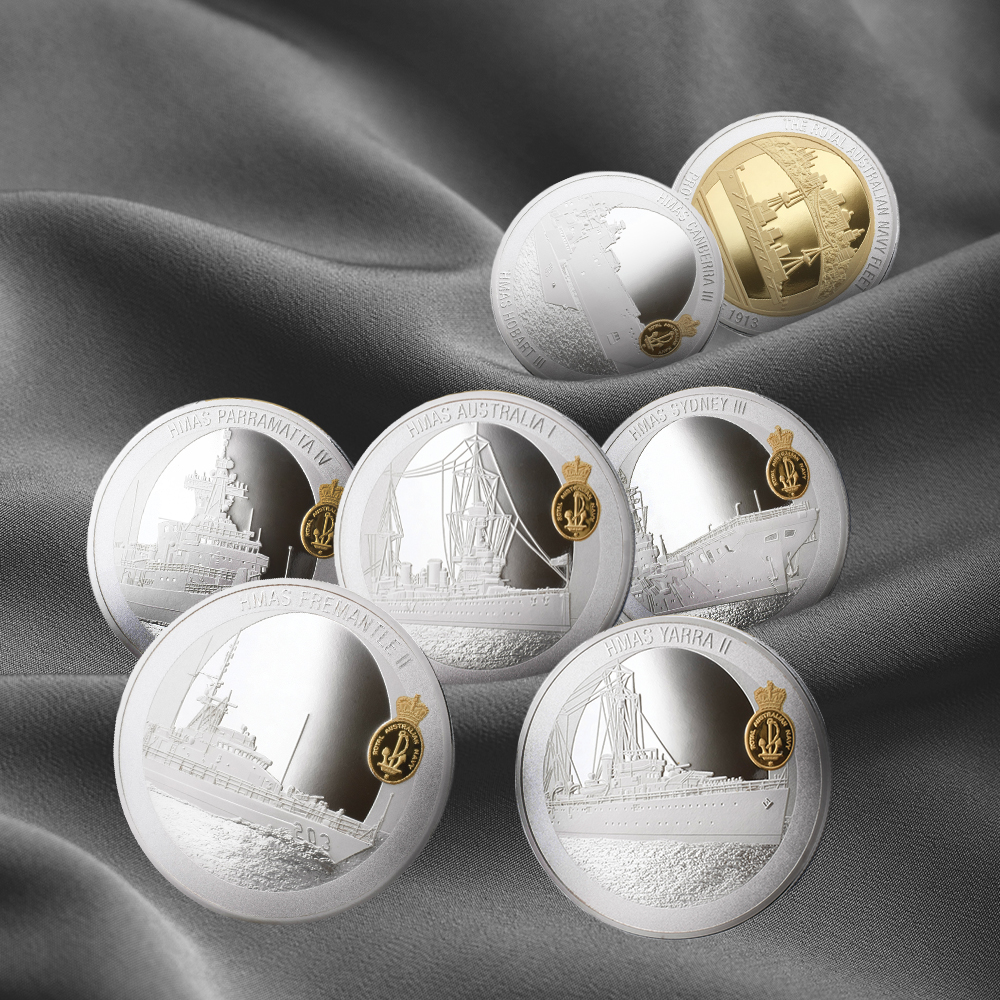 Pride in Fleet
Our Nation Our Navy 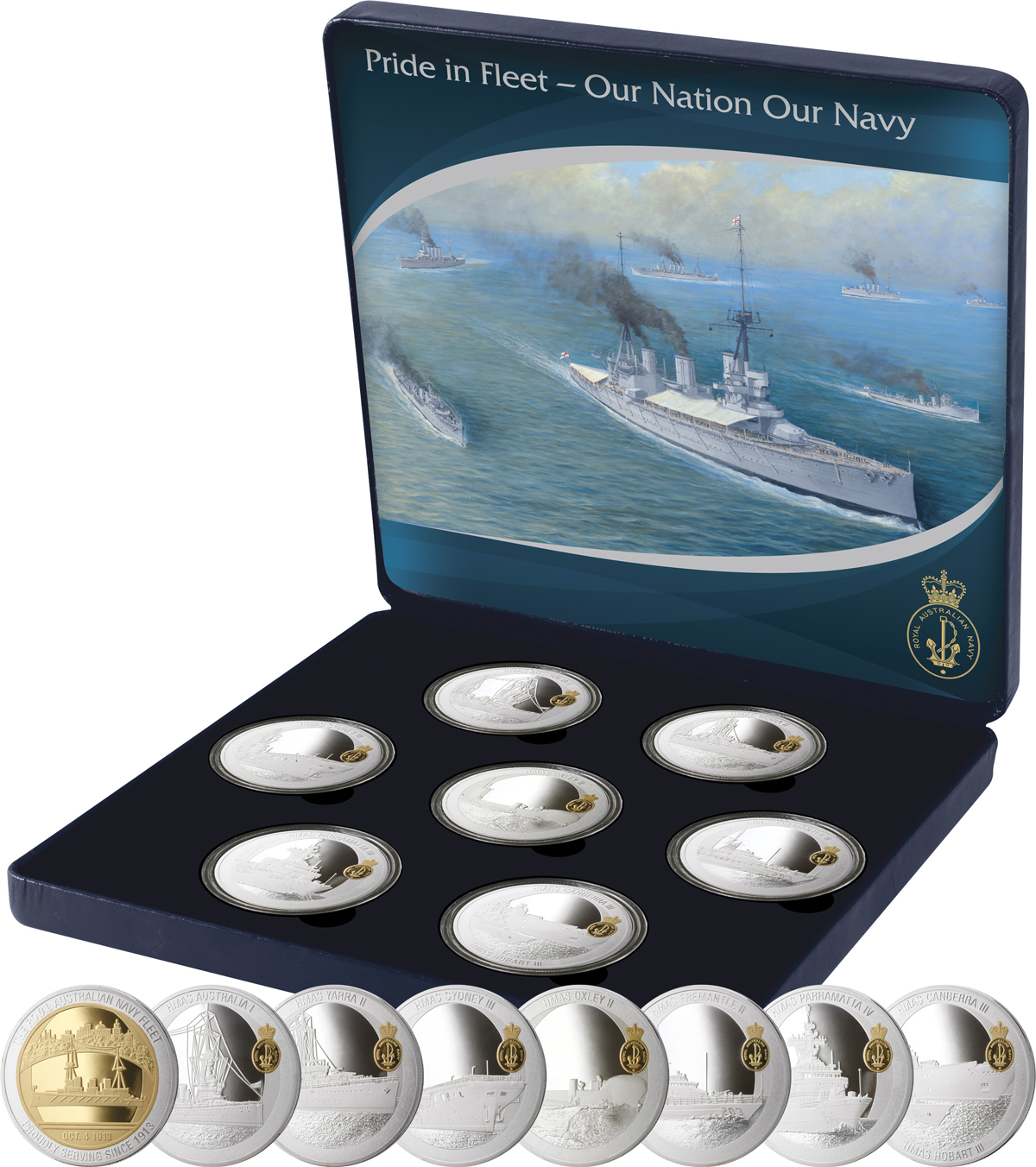 In The Spirit Collection we bring to life the extraordinary experience of John Simpson Kirkpatrick of the Australian Army Medical Corps.
Remembered now as Simpson and his Donkey, John was a larrikin with a fierce commitment to his fellow Anzacs.
On the battlefront the 'man with the donkey' ferried hundreds of wounded and dying to care.
He died on May 19th 1915. The collection features an iconic Simpson Image, the 1904 Rising Sun hat badge and a specially minted landing image.

The ANZAC troops who stormed ashore Ari Burnu (now Anzac Cove), Gallipoli on 25 April 1915 were the finest troops ever assembled by the Australian Imperial Force (AIF) and the New Zealand Expeditionary Force (NZEF).
Their ill-fated campaign is legend and foundation of our national identity. The adversity faced at Gallipoli is well known and just surviving the almost unbearable conditions was in itself an incredible mark of courage.
There were also many acts of self-sacrifice, heroism and tenacity that defied the imagination, and they were honoured with the Empire’s highest military honour - the Victoria Cross (VC).
Its simple wording “FOR VALOUR” was personally chosen by Queen Victoria for whom the medal is named. Eight Australians, one New Zealander, and a New Zealander serving in an Australian unit were awarded the only Imperial bravery medal available to all ranks.
They lived and fought at a time and a place, and in conditions we can barely comprehend. However, one thing shines through the decades since they set a standard we can all aspire to. The Anzac Spirit.

They did not enlist for medals or glory, but their bravery, the ferocity of the fighting and the number of troops involved saw the Australian and New Zealand Army Corps (ANZAC) awarded an unprecedented number of medals during the Gallipoli campaign.
At Gallipoli alone, 10 of the fabled Victoria Cross medals were awarded to ANZACs in just eight months - more than were awarded to Australian and New Zealanders in the three years of the Boer War.
The system for presenting medals was always a difficult process - how do you put a criterion on bravery in a time of war? The reality was that many acts of heroism went unseen or unreported and various commanders also had differing standards.
Nevertheless, from the esteemed Victoria Cross to the 'unofficial' Gallipoli Star, the medals of Gallipoli remain as recognition of the bravery, valour and selfless sacrifice made by our Anzacs during the most legendary battle in Australia's military history.

The Aussie tradition of extraordinary service and looking out for your mates started in the Boer War. It was enhanced at Gallipoli and shines brightly today.
Helping your mate is not restricted to any one campaign. Indeed, it is a trait that seems to flow in the veins of Diggers in every campaign.
One of these Diggers was Simpson, the Man with the Donkey, at Anzac Cove. The bravery shown by John Simpson Kirkpatrick soon became one of the most prominent symbols of Australian courage and tenacity at Gallipoli.
Instructed to recover and assist the wounded, he used a donkey to carry men down from the front line, often exposing himself to fire.
No doubt each and every soldier throughout the proud history of Australian military service has had a story to tell; a story of ordinary men and women providing extraordinary service.
Stories that tell of the bond of mateship, the highs and the lows, the courage and fear, and those they lost. These important contributions to our history are to be passed on and shared through the generations.
This collection pays tribute to the ordinary Digger who gives extraordinary service.

The Limited Edition Sands of Gallipoli Centenary proof medallions are an enduring keepsake for avid collectors and those inspired by this historic national milestone.
These are true heirlooms to be passed through the generations. Each comes with a numbered certificate of authenticity.
Featuring especially commissioned original artworks by renowned Australian artist Drew Harrison, the medallions capture the story and spirit of the Gallipoli campaign. The reverse of each features the evocative Gallipoli Centenary insignia.

The limited edition medallions feature five iconic images from the Landing at Gallipoli, masterfully recreated in highly polished silver and frosted gold plating.
Incorporated in the medallion ‘The Landing’ is a clear capsule containing authentic sand from Gallipoli and a miniature 1904 Rising Sun hat badge.

Sands of Gallipoli The Battle of the Nek Medallion Set

OUR PEOPLE - THEIR SERVICE

The Our People - Their Service Collection we remembers the people who made up the various arms of ANZAC service; from troopers and artillery men, through to our medical corps and signalmen.
These six limited edition proof quality medallions tell their story. The medallions are housed in a rotating timber stand and feature a header medallion, a vial of Gallipoli sand and a numbered certificate of authenticity.

In this, the first year in our 100th anniversary commemorations of the First World War (1914-18), the story of our boys' passage to and through Gallipoli unfolds with the superb Sands of Gallipoli Limited Edition Medallions.
Six stunning medallions have been minted with the obverse of the medallions featuring designs based on a series of sketches depicting the early stages of Australia's involvement in the Great War.
The sketches, by renowned Australian artist Drew Harrison, were specially commissioned for this collection. The reverse of the medallions reflects the reverse of the Victory Medal.

Gallipoli was a turning point in Australian history. Here, in its first major battle fought as a nation, Australia found a spirit forged in mateship and courage.
The ill-fated campaign to invade the Gallipoli Peninsular, capture Constantinople and open up the Dardanelles to allied shipping was part of Britain's grand plan to defeat Germany's Turkish ally.
Against fierce opposition Australian and New Zealand troops fought with such courage that Australia's official war correspondent Charles Bean concluded, 'nothing can alter what happened now:
ANZAC stood and still stands for reckless valour in a good cause, for enterprise, resourcefulness, fidelity, comradeship and endurance that will never admit defeat.'

IN THE SERVICE OF OTHERS

A collection created to honour those who have risked their lives in the defence of others. For the Australian military, these extraordinary acts of bravery are recognised by the Victoria Cross (VC). For these acts performed in civilian and non-combat military situations, the Imperial George Cross (GC) was awarded until the uniquely Australian Cross of Valour was introduced in 1975. Explore the collection. 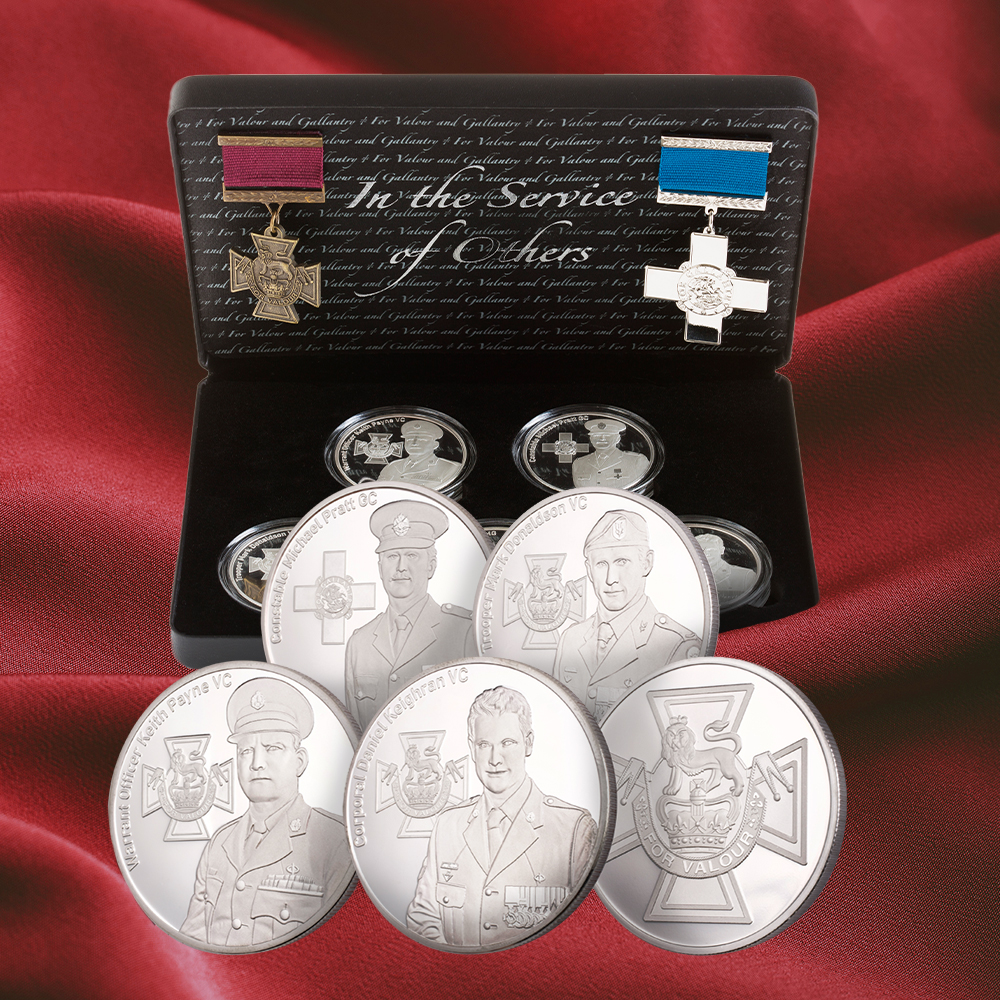 In The Service Of Others

ORDER SINGLES AS A SET 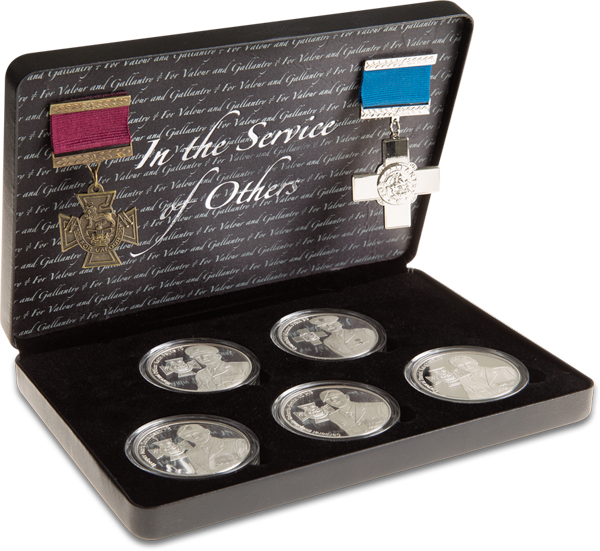 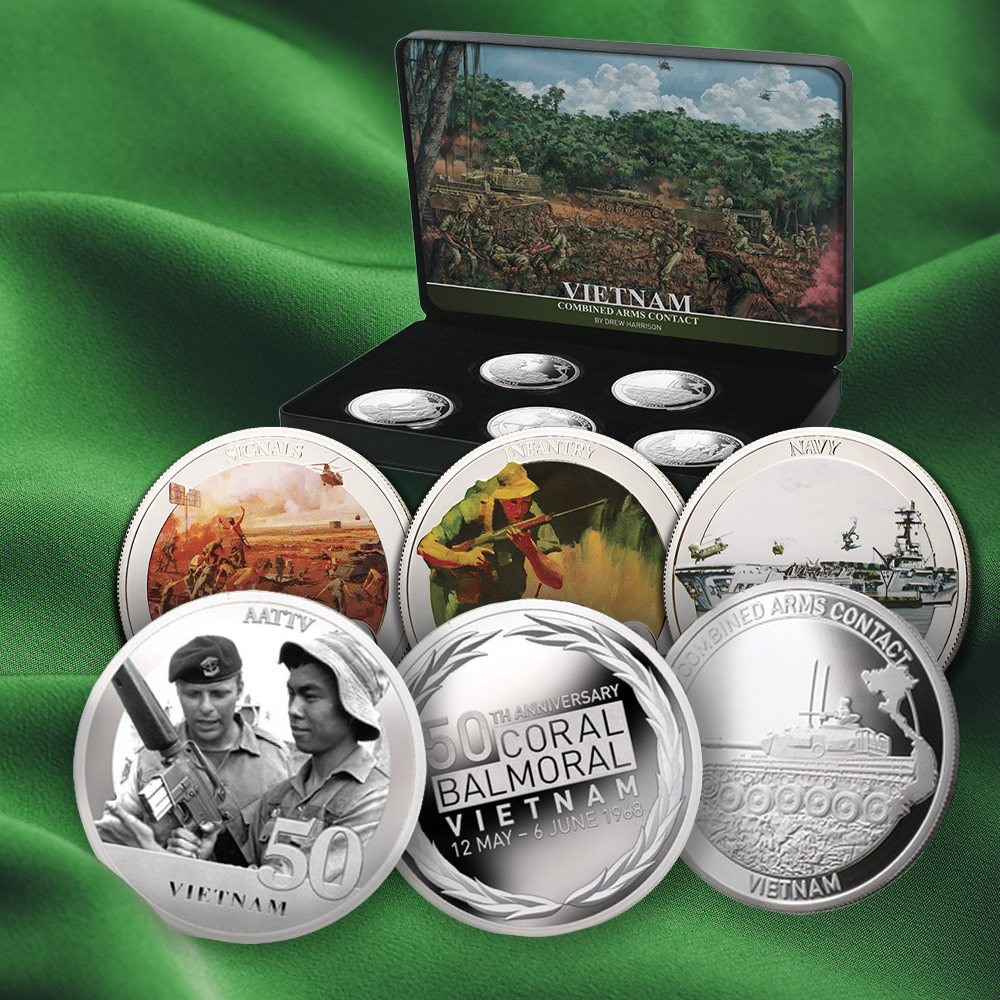 Some 60,000 Australians served in the Vietnam War - on land, in the air and at sea. These incredible medallions help to share and honour their story. Commemorate and remember the service of the brave young men and women who went to war. All Vietnam medallions are produced in a very low mintage, with no more than 1,000 released.
Discover the range of Vietnam Limited Edition Medallions.

Limited Edition Medallions that commemorate all those who served Australia in World War II. These beautifully detailed limited edition medallions capture and honour the courage and bravery of those who serve across all services and theatres of war, from Europe to the Pacific. Honour and commemorate with these unique pieces that are a favourite of collectors. 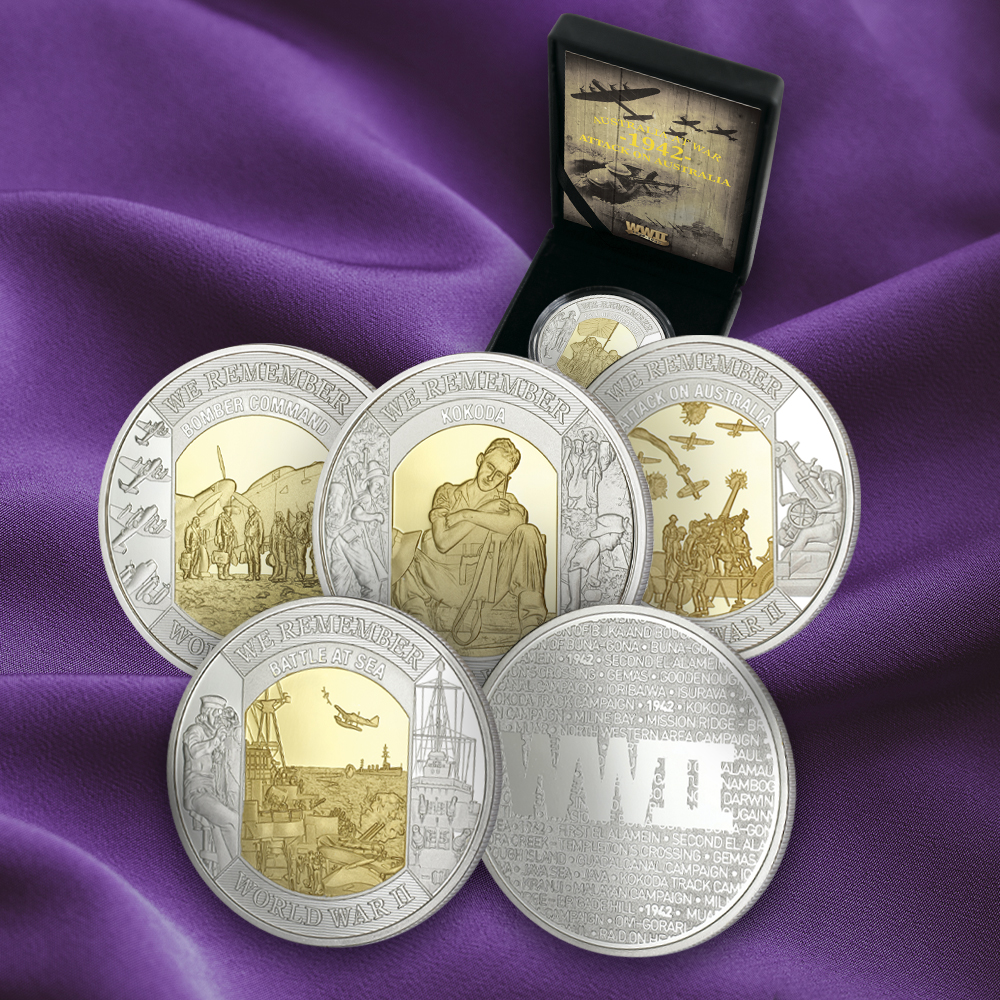 The Spirit of the ANZACs Collection