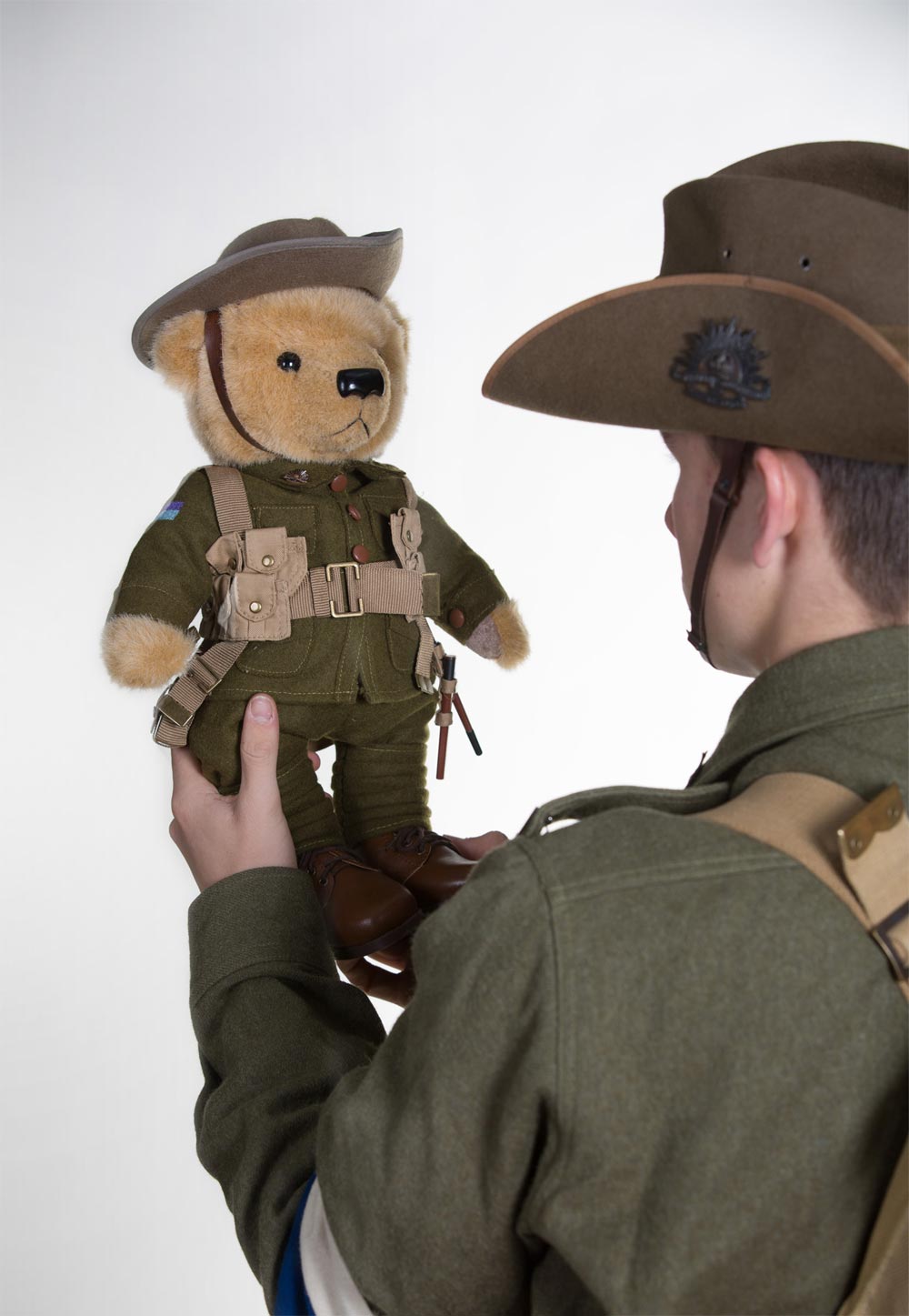 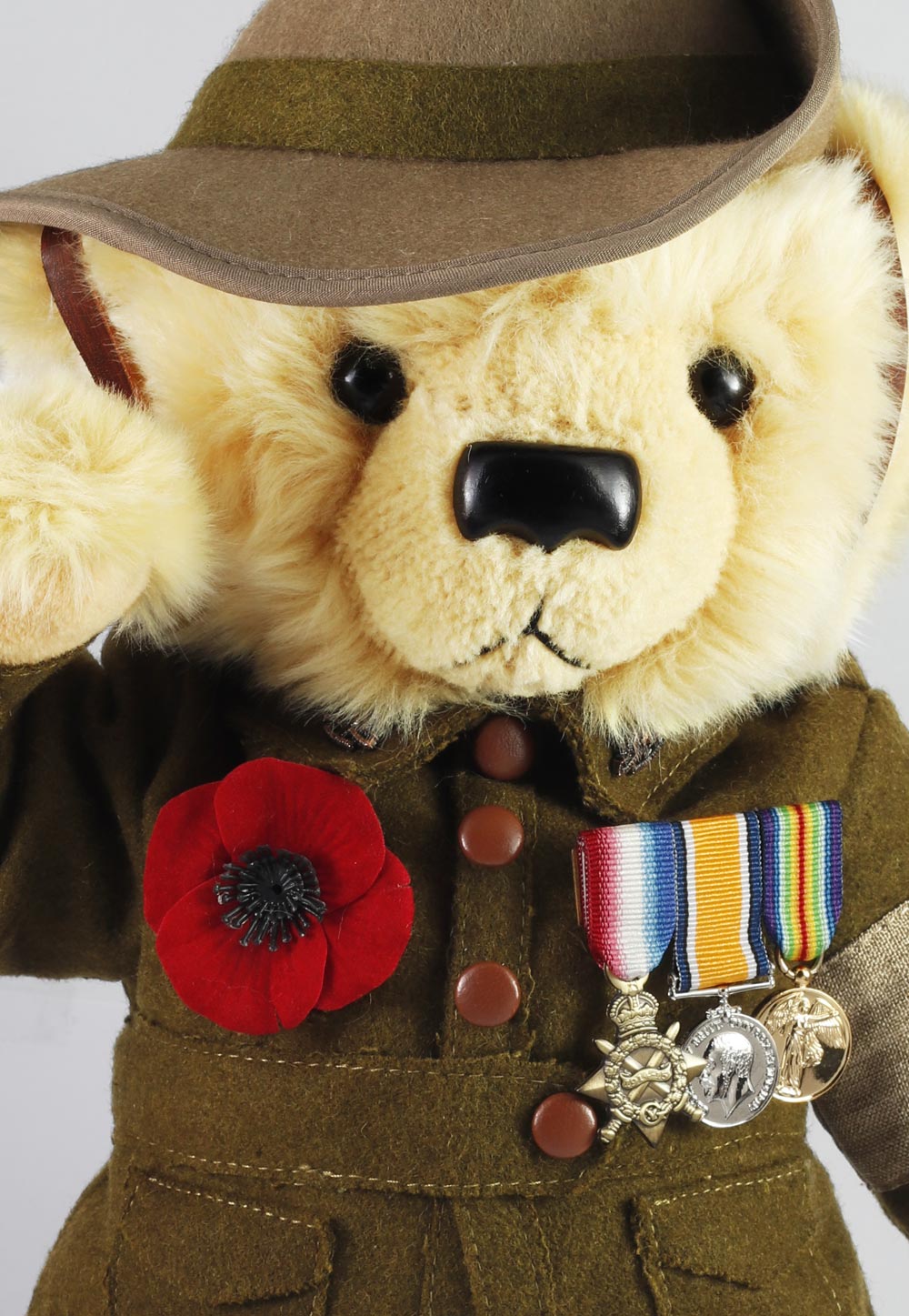 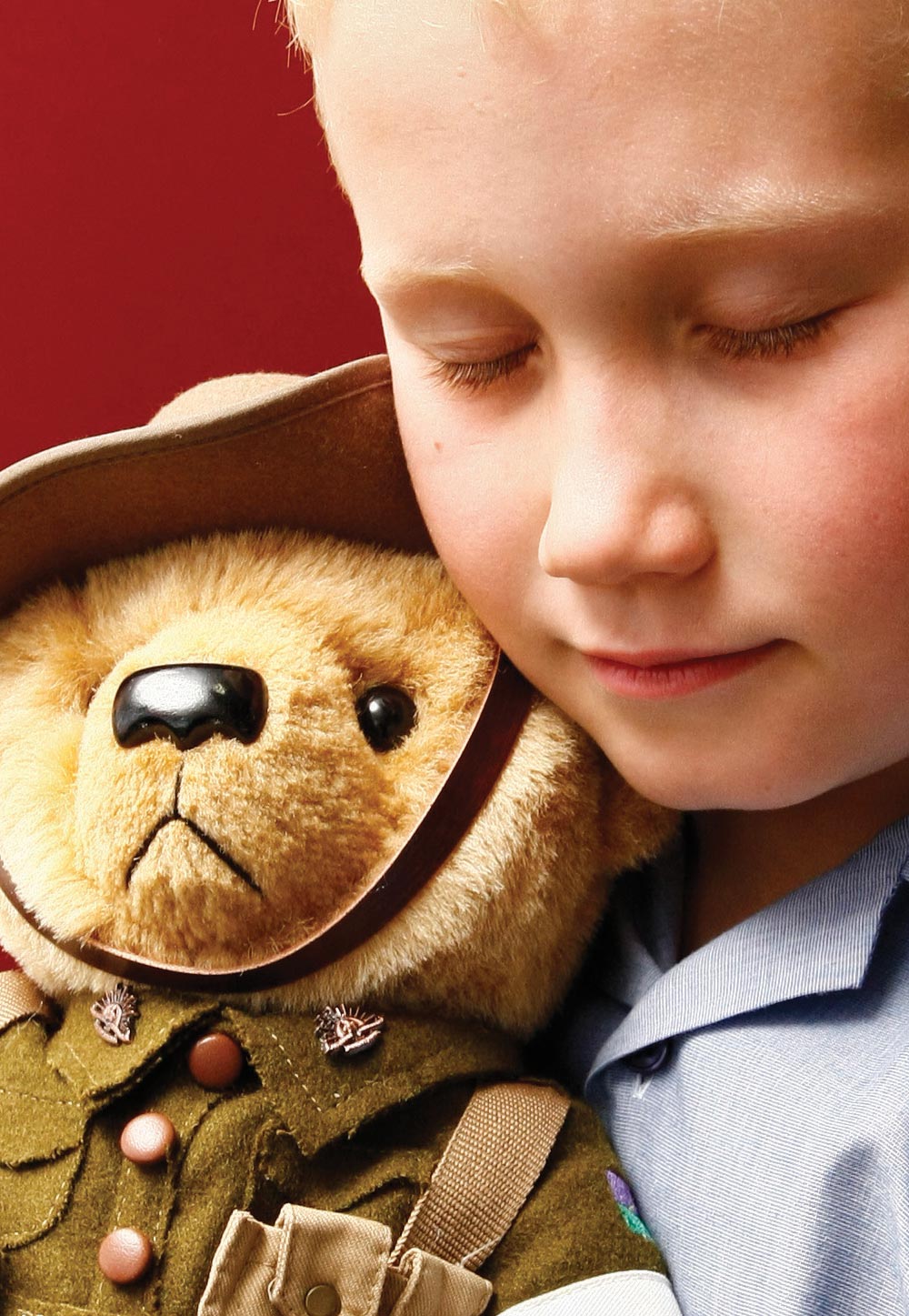 This is the world’s most stunning and sought after collection of detailed Australia in the Great War limited edition bears. Each uniform is historically true, including replica badges, FREE ID tags and webbing. Additional accessories available. Each bear has a story of service to tell. A real treasure to remember the Centenary. 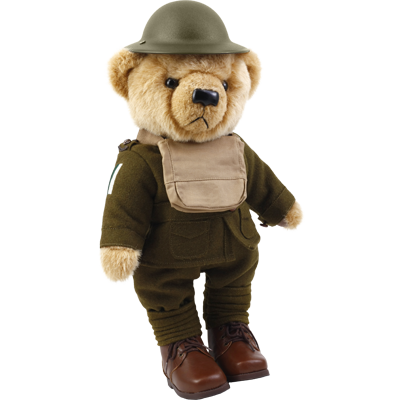 Lieutenant Albert Murray, the Western Front Ltd Edition Bear, is the first ever Australia in the Great War officer bear. He is kitted out in boots and proudly wears his officer pips. In preparation for the Western Front he also wears 'Brodie' helmet and PH anti-gas mask carry bag. This 40cm digger is limited to just 10,000 units worldwide. He comes with a numbered certificate of authenticity.

The Armistice Centenary Bear salutes all who served and comes with a group of miniature replica WWI medals, a remembrance poppy and a Centenary of Armistice armband. He has not been named and wears no webbing or colour patch to represent a single aspect of service. He is every digger.

Limited to only 10,000 examples, each bear is accompanied by its own numbered certificate of authenticity.

A very special bear to commemorate 100 years since the guns fell silent.

Inspired by the time-honoured heritage of traditional British and continental mohair teddy bears, the Spirit of Remembrance bear hearkens back one hundred years – to a time when so much was lost, and when our nation made a Promise to Remember. 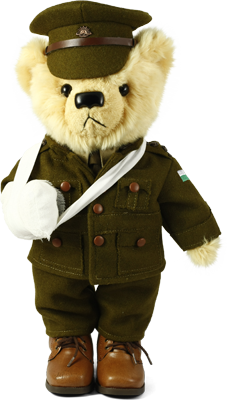 Captain John Murray continues the story of the original 1914 edition Private John Murray. As a private he shared the story of Australia’s entry into the war. As a captain he now remembers the men promoted through the ranks to replace lost officers. Capt. Murray comes with a numbered certificate of authenticity and is limited to only 5,000 bears for worldwide collectors. 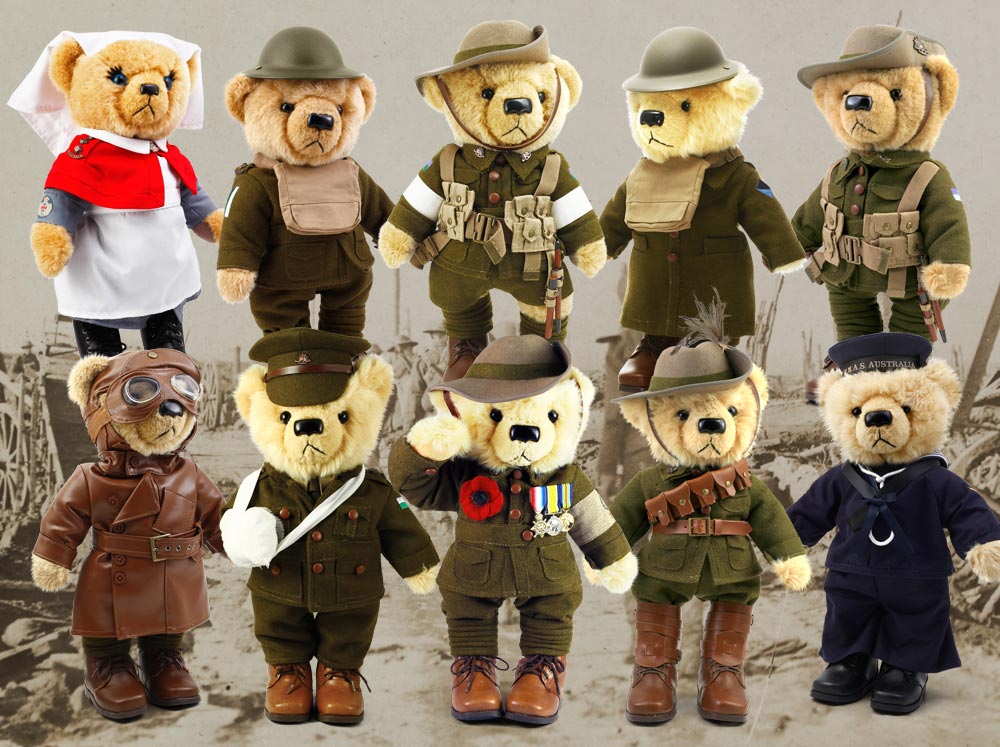 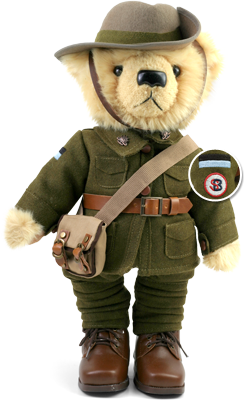 Private Clarence Thomas, the Gallipoli Stretcher-Bearer Bear, is ready to help the wounded with his Field Dressing Haversack. Medics didn't wear the standard webbing; rather they had only a leather belt and haversack. Only 2,500 Priovate Clarence will be released for the Centenary. This hero of the trenches comes with a numbered certificate of authenticity. 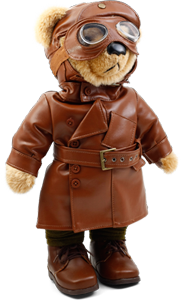 Lieutenant Thomas Hendy helps us remember the men of the Australian Flying Corps who pioneered Australian military aviation during the Great War of 1914-1918 – and the proud heritage that led to the Royal Australian Air Force and the Fleet Air Arm.

Hendy’s uniform reflects the full-length leather ‘Maternity Pattern’ flying jacket and leather flight helmet worn by many aircrew of the A.F.C. to provide warmth during flights in open cockpit aeroplanes. The large angled external pocket on the left-breast provided quick access to maps and notebooks, while beneath the warmth of the coat many would simply wear the standard dismounted troops’ khaki uniform of the Australian Imperial Force. International limited of just 5,000 bears. Hendy comes with a numbered certificate of authenticity. 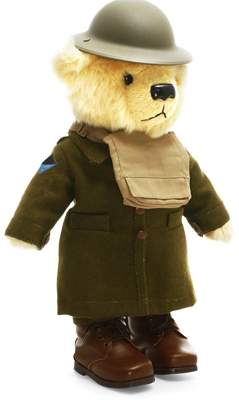 Sergeant Wilson wears one of the most iconic and versatile uniform items of the Great War - the A.I.F. Greatcoat. Before service abroad most Australian troops had never seen snow or ground ice, and the chilly winters added to the hardships men faced at Gallipoli, in the deserts and on the Western Front. The Greatcoat was essential protection. The heavy woollen khaki coat weighed about 6.5 pounds (3kgs) and served as an outer jacket, additional blanket and often as a shelter. Grey also has his Brodie helmet and anti-gas mask carry bag at the ready. Limited to just 5,000 bears for worldwide collectors, Grey comes with a numbered certificate of authenticity. 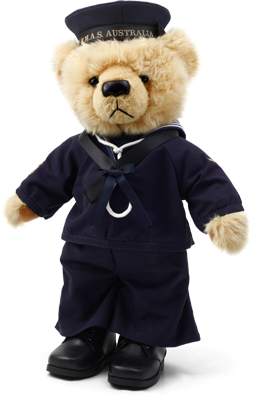 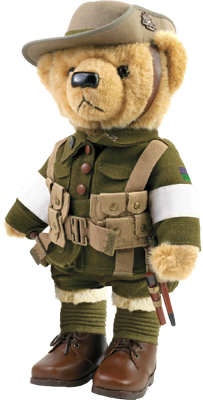 The unique Limited Edition Corporal Cohen Lone Pine Bear is a must have addition to your collection, buy now from Australia's leading military site - Military Shop. Corporal Cohen wears the standard dismounted troops' uniform and webbing but with trousers cut to shorts in the Gallipoli summer. His white armbands and back patch were worn to help diggers identify 'friendly' soldiers in the heat of the battle. Corporal Cohen stands 40cm in his detailed Great War uniform and comes with certificate of authenticity. Only 10,000 worldwide. 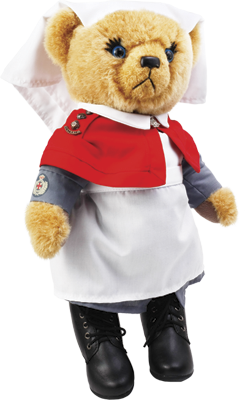 The unique Limited Edition Sister Bernadette Nurse Bear is a must have addition to your collection, buy now from Australia's leading military site - Military Shop. Sister O'Meara's uniform represents the 'working dress' of the Australian Army Nursing Service and includes zephyr grey dress with white collar, white veil and scarlet cape; her rank of Sister is shown by the stars or 'pips' worn on her epaulettes, which are accompanied by curved bronze 'AUSTRALIA' titles. She wears the Rising Sun badge at her throat as a brooch and the cloth badge of the Australian Army Nursing Service is displayed on her right sleeve. Sister Bernadette O'Meara stands 40cm in her working shoes and comes with certificate of authenticity. Only 10,000 worldwide.

Private Ernest Harvey, the Gallipoli Centenary Bear, stands about 40cm in his boots and slouch hat and wears the standard A.I.F. webbing, complete with water canteen, bayonet and helve (the handle for his entrenching tool). Limited to just 10,000 units worldwide, this superb collectable fellow comes with a numbered certificate of authenticity.

Trooper Jones proudly represents the unique uniform of the ALH, including an actual emu plume affixed to his slouch hat, the 1903 pattern leather leggings, riding breeches and the 1903 pattern ammunition bandolier. The first ALH regiments were formed in August of 1914 and by war’s end some 32,000 men had served in fifteen ALH regiments raised for overseas service. Trooper Jones is limited to 10,000 bears.

Great accessories to go with your limited edition teddy bear.

Share your more recent family history with the exclusive Vietnam 'J' Bear. We call him Barry but it's not official. Only 1,000 were produced and only a small quantity remain.
Order now

Our exclusive military bears are a big hit with serving personnel, kids, loved ones and collectors. Check them out. 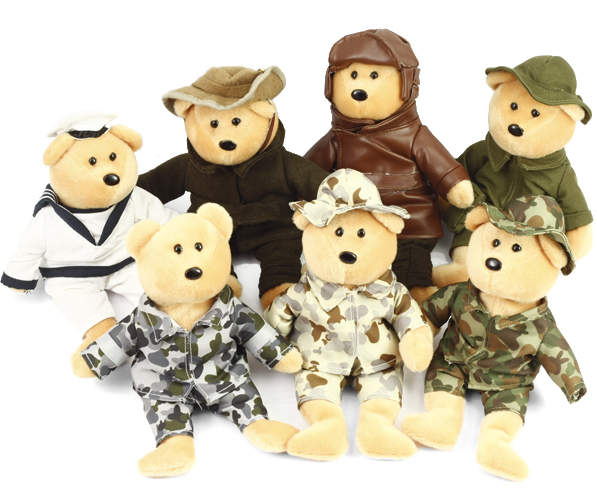